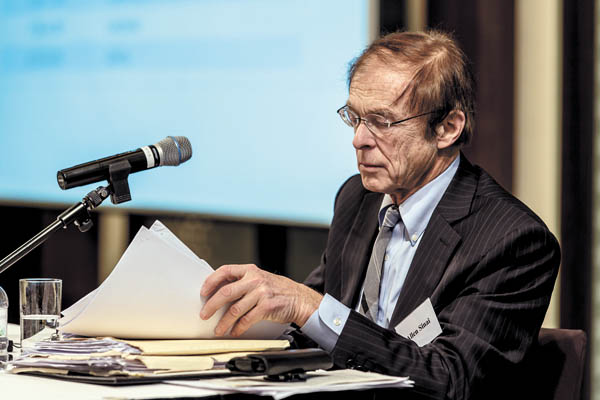 Allen Sinai, chief global economist of Decision Economics, at a forum held at the Westin Chosun Hotel in central Seoul, on Tuesday. [INSTITUTE FOR GLOBAL ECONOMICS]

Allen Sinai, chief global economist at Decision Economics, downplayed concerns about the recent plunges on the Chinese stock market and stressed the recent devaluation of the renminbi doesn’t mean the world’s second biggest economy is collapsing.

In fact, Sinai said, the yuan should be depreciated more.

“The Chinese government says the movement of its exchange rate is in line with the movements in other Asian currencies, and I agree with this argument,” the economist said at a forum held at the Westin Chosun Hotel in central Seoul hosted by the Institute for Global Economics on Tuesday.

“The Chinese currency is overvalued at around 6.59 to the dollar,” he added, “and the currency is estimated to devalue to 7 to 7.25 or even lower against the greenback.”

Sinai said recent decline in the Chinese stock market that halted trading twice last week was largely the result of a psychological worry among traders and had nothing to do with actual economic data from China.

Sinai said traders fear something worse is going on in China because the country is not transparent.

“Traders and investors don’t believe in the numbers reported by China, and in the trading world, there is always a chance that something happens,” he added. “If [it appears like] China’s economy is collapsing, the only thing that traders can do is to sell.”

Sinai said volatility in the Chinese economy can affect other major countries including Korea since its market has grown so rapidly.

“If traders sell Chinese stocks [when they believe] there is a chance that the Chinese economy is collapsing, then they would have to sell stocks in Korea, Japan and the United States, because China is the second largest economy in the world with its 1.3 billion people,” he said.

But Sinai does not believe this year will necessarily be a weak one, and has an optimistic view.

“Traders always overreact in the market when fundamental uncertainty or fear exists. There are lots of risks out there, but at the beginning of the year I hate to be gloomy,” he said. “The United States and global economies will grow with little inflation.”

The Korean stock market has been tumbling since the beginning of the year, falling more than 3 percent since the end of 2015, largely because of growing jitters about the Chinese market.

Although the market further dipped on Tuesday, the depth of the fall eased, a sign that the market could be stabilizing.

Sinai emphasized that there are three important factors for this year’s global economy. The first is low crude prices. He said oil-producing countries including the members of Organization of Petroleum Exporting Countries will struggle this year. On the contrary, as crude prices are expected to see additional drop of 4 percent, countries that import crude oil will benefit from lower prices.

The appreciation of the dollar will also have a strong influence on the market. The appreciation of the greenback will likely increase the purchasing power of the biggest traded currency in the world and this will lead to raising inflationary pressure. Sinai also said the advancement of innovative technology this year will play a significant role in transforming labor markets.