Inflation is at an all-time low, but some prices rise

Inflation is at an all-time low, but some prices rise 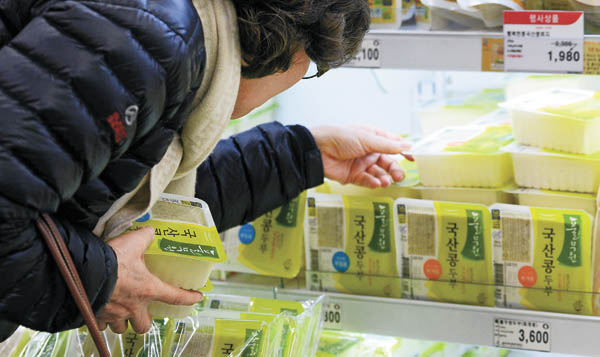 A customer looks at tofu products being sold at a retailer in Seoul. [NEWSIS]

For 28-year-old working mom Kim Se-young, every trip to the supermarket is a frustrating one. That’s because Kim, like many consumers, have seen the price of daily necessities going up as the economy shows little signs of improvement.

And it may get worse as popular staples like eggs, tofu, ramyeon and even beer are showing signs of price increases, despite inflation being at an all-time low.

“It is frustrating to see my spending for groceries rising because of price increases,” Kim said. “The change is very noticeable for items like onions, and it directly led to an increase in living costs and decrease in savings for my household.”

Although the prices of goods continue to rise, headline figures like the consumer price index show inflation is not going up with them.

The average inflation rate for 2015 stood at 0.7 percent, the lowest since records were kept, according to Statistics Korea. The discrepancy between the high price of goods and low inflation rate lies in the way inflation data is calculated. The method examines the weighted average - not just the average - of prices of over 400 consumer goods and services.

So while the price of onions did rise by a whopping 128.8 percent in December compared to the same period last year, and prices of other vegetables like lettuce, garlic and scallions also jumped over 30 percent during the cited period, the range of items doesn’t carry enough weighted value to pull up the overall inflation rate. The exceptionally low prices of commodities and oil also contributed to a low inflation rate last year.

To make things worse, food and beverage producers are slated to increase the prices of their products, further intensifying the financial burden on consumers.

Pulmuone, a leading food producer, raised the price of 36 of its tofu products by an average 5.3 percent last week, citing the rise in raw materials and personnel costs.

Competitors of Pulmuone, the No. 1 tofu maker with 49 percent of market share, are likely to follow suit.

Pulmuone also raised its egg prices by an average 3.9 percent.

Although the decision to increase tofu prices was the first in five years, the company has been criticized for not announcing it in advance.

Tofu makers CJ CheilJedang and Daesang have not yet decided on any hikes, but sources there said that the companies are considering the option.

“We believe there are many factors that can lead to a price increase,” a source at CJ said. “But still, we don’t have any official announcement regarding the issue for now.”

The hike was met with criticism, particularly because the price of major raw materials for Coca-Cola has been on the decline.

Consumers of alcohol are also raising their eyebrows as liquor makers push for a similar move.

Both Lotte Liquor and Hite-Jinro pumped up the prices of their signature soju. The price of Lotte’s Chumchurum went up 5.5 percent, and the price of Hite’s Chamisul rose 5.6 percent. 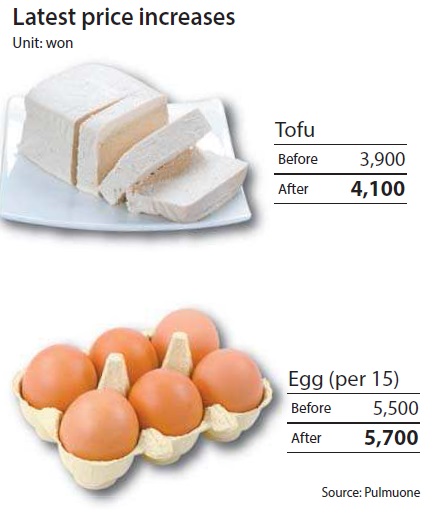 Breweries have a range of factors that can justify a potential price increase. For example, malt used to be exempt from allocated customs until 2014, when the government began imposing a 30 percent tariff, increasing production costs.

A source from Oriental Brewery, the country’s top beer company, said that it monitors the market but has not yet decided on a price hike.

“We haven’t raised the price since 2012, but it is true that there has been an increase in costs, including personnel expenses and imports of raw materials,” the source told the Korea JoongAng Daily.

“But we haven’t yet brought up the issue of increasing prices.”