Tax revenue targets are in reach

Tax revenue targets are in reach 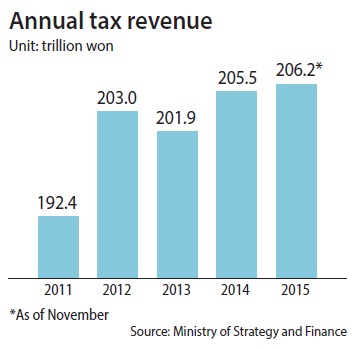 For the first time in four years, the government is likely to meet its tax revenue target.

The achievement is largely thanks to the housing market, which has been rebounding on low interest rates and deregulations in household loans, as well as the tax hike on cigarettes.

In 2015, the number of property transactions hit nearly 1.2 million, the most since 2006. Cigarette prices also rose 2,000 won starting last January.

Although figures for December haven’t yet been included, total tax revenue is expected to meet the government’s aim of 215.7trillion won, the ministry said.

The government had reached 95.6 percent of its target as of November, the report showed.

Despite the improvements in tax collection, the ministry said the government posted a deficit of 30.1 trillion won in its operating budget over the January-November period.

“The fiscal balance is also improving, as the operating budget deficit narrowed in recent months,” said Lee Jang-ro, director at the financial planning bureau at the ministry.

The deficit narrowed about 30 percent from September to October, from 46.3 trillion won to 32.5 trillion won.

The central government’s debt stood at 561.2 trillion won, up 11.6 percent 58.2trillion won from a year earlier, the report showed.