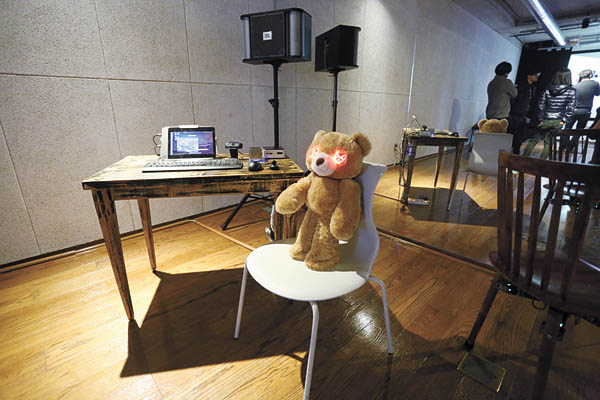 To Saturday: The exhibition features 50 robots created by artists and engineers with support by Art Center Nabi, which has constantly focused on the fusion of art and new technology, in particular robots.

The visitors can interact with many of the robots on display. They include a soju-drinking robot and a robot that looks like a cute stuffed bear but, if spoken to, gives answers in a flirtatious, deep male voice.

Admission is free but advance reservations are required. Go to the Dongguk University subway station, line No. 3, exit 4, and walk for 10 minutes.

To Jan. 30: The show features the recent sculptures by the renowned American artist Frank Stella, 79. Twelve of the 13 pieces now on view at Leeahn Gallery hang on the walls, showing their relation to Stella’s famous paintings related with the minimalist movement in the 20th century. They are part of the artist’s “Bali Pieces” series created between 2003 and 2009 and his “Scarlatti Sonata Kirkpatrick” series created since 2006. Each sculpture of the “Scarlatti” series, inspired by the 18th-century Italian composer Domenico Scarlatti’s sonatas, consists of a 3-D-printed body and rhythmically bent steel tubes.

Admission is free. Go to Gyeongbokgung Station, line No. 3, exit 3, and walk 7-8 minutes.

Most of the other works on display also deal with isolation and lack of communication. “64 Rooms,” a structure divided into 64 small cells by dark blue velvet curtains, is “a labyrinth of voluntary desolation and absence,” as the artist said. But in some of the other works such as “1,000 Scribes,” such isolation leads to a higher level of communication.

Admission is 4,000 won ($3.30), which covers entrance to the other shows going on at the Seoul museum. The museum is closed on Mondays. Go to Anguk Station, line No. 3, exit 1 and walk for 10 minutes.

Admission is 15,000 won and covers the museum’s other exhibits except for the James Turrell Gallery. The museum is closed on Mondays and located inside the Hansol Oak Valley resort in Wonju, Gangwon.

To March 20: After a successful exhibition in 2012, the National Geographic is returning to Seoul with a large photo exhibit. This exhibition provides an overview of the history of civilization, but focuses on the journeys and adventures that have led to space and ocean discoveries. The collection, devoted to photographic records of such discoveries, consists of 200 items, including an exclusive display of the submersible craft used by National Geographic’s explorer-in-residence Sylvia Earle.

As the exhibition’s scope is vast in terms of time and location, it features a wide range of objects, such as a skull coated with plaster that is about 8,000 years old - the oldest relic from the museum’s collection - and artifacts from ancient Egypt, Greece and Rome. It also includes an array of paintings and initial sketches by Rembrandt, Durer, Matisse and Picasso.

One of the highlights is “Yellow Cat Romps Butterfly” by Kim. In the painting, a chubby, furry kitten, looking curious and mischievous, turning its head to gaze at a black butterfly. In ancient Korea, cats represented the age of 70 while butterflies stood for the age of 80. So, the painting could well have been a birthday present, wishing the recipient a long, healthy life.

To May 8: D Museum, a new branch of the Daelim Museum west of Gyeongbok Palace in central Seoul, opened in early December.

The inaugural exhibition features lighting installation works by nine foreign artists and designers. In the second room is London-based Australian designer Flynn Talbot’s “Primary.” In the dark, light of changing primary colors is projected on a triangular sculpture covered with many smaller triangular pyramids. It creates numerous different abstract painting-like images, depending on the time and angle. And a piece by Russian visual-auditory art group Tundra, “My Whale,” is on display in the sixth room. It is a synaesthetic installation work featuring image and sound patterns that resonate together.

Admission is 8,000 won for adults. The museum is closed on Mondays. It is located at Dokseodang-ro 29-gil in Yongsan District, central Seoul.