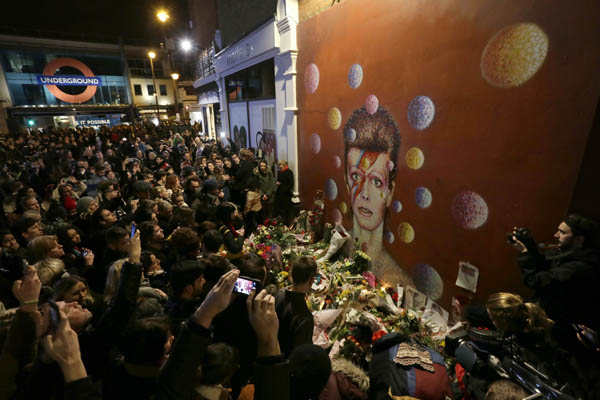 People gather next to tributes placed near a mural of British singer David Bowie by artist Jimmy C, in Brixton, south London, on Monday. The legendary musician Bowie died of cancer on Sunday at 69. [AP/NEWSIS]

LONDON - Tributes have poured in for singer David Bowie, who died Sunday aged 69. Politicians, entertainers, actors and astronauts have expressed their sadness at his death. Here is a look at some of the reactions:

“Over here on E Street, we’re feeling the great loss of David Bowie. David was a visionary artist and an early supporter of our music. Always changing and ahead of the curve, he was an artist whose excellence you aspired to. He will be sorely missed.’’

“Without this visionary and his friend Iggy Pop where would Blondie be today? Silly question and one that can’t be answered really but there is no doubt in my mind that Bowie played a big part in our future successes. As for now, love you David Bowie.’’

“David was always an inspiration to me and a true original. He was wonderfully shameless in his work. We had so many good times together. ... He was my friend. I will never forget him.’’

“I am still in shock. Never saw it coming. ... My deepest condolences to Iman and the family. An amazing life. An amazing career.’’

“Bowie WAS The Man Who Fell to Earth. Curious, brilliant, enigmatic and sweet. We needed him and he appeared, changing our perceptions forever.’’

“As John and I had very few friends, we felt David was as close as family. Sweet memories will stay with us forever.’’

“Very sorry and sad to say it’s true. I’ll be offline for a while. Love to all.’’

“He has left us for another world, beyond the darkness of this present one vividly so depicted in the shadows of his last video. I truly pray he’s welcomed to the light by his Maker in that great today, which has no tomorrow.’’

“David Bowie we will remember your brilliance. Heartfelt condolences to family, friends and fans around the world.’’

Astronaut Tim Peake, who is aboard the International Space Station:

“Saddened to hear David Bowie has lost his battle with cancer - his music was an inspiration to many.’’

“He never seemed of this earth. Now he’s left it. He bent rules, gender, genres and our minds. RIP David Bowie. One. Of. A. Kind.’’

“Good-bye, David Bowie. You are now among #Heroes. Thank you for helping to bring down the #wall.’’

“The Rolling Stones are shocked and deeply saddened to hear of the death of our dear friend David Bowie. As well as being a wonderful and kind man, he was an extraordinary artist, and a true original.’’

“Im Devastated! This great Artist changed my life! First concert i ever saw in Detroit!’’

“His music played a very strong part in British musical history and I’m proud to think of the huge influence he has had on people all around the world.”

“David’s friendship was the light of my life. I never met such a brilliant person. He was the best there is.’’

“I wish he could have stayed on earth longer. RIP.’’

“Genius is an over-used word but I think musically, creatively, artistically David Bowie was a genius. For someone of my age he provided a lot of the soundtrack of our lives.’’

Jazz guitarist Pat Metheny who worked with David Bowie on the song “This Is Not America’’:

“He carried the kind of broad view of music and art that was inspiring to me as a collaborator and a fan. I feel very lucky to have had the chance to be around him.’’

“David Bowie was one of my most important inspirations, so fearless, so creative, he gave us magic for a lifetime.’’