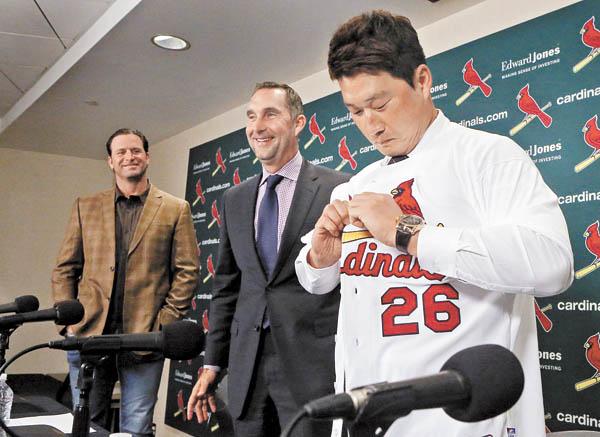 After conquering Korea and Japan, Oh Seung-hwan’s next stop will be the United States.

The pitcher has sealed a one-year contract with the St. Louis Cardinals in Major League Baseball (MLB), with a club option for 2017, the team announced Tuesday (Korean time).

The financial details of the deal weren’t announced, but according to the St. Louis Post-Dispatch, the contract is reportedly worth $5 million. Other sources are say that the former Samsung Lion could earn $6 million in a second year if the 11-time World Series champions decide to keep him.

The 33-year-old right-hander is now the third Korean to sign with an MLB club this offseason after slugger Park Byung-ho joined the Minnesota Twins and outfielder Kim Hyun-soo moved to the Baltimore Orioles.

They will join the existing big leaguers - Choo Shin-soo of the Texas Rangers, Kang Jung-ho of the Pittsburgh Pirates and Ryu Hyun-jin of the Los Angeles Dodgers - for next season.

Oh, who is the all-time leader in saves in the Korea Baseball Organization (KBO) at 277, said that becoming a major leaguer is like a “dream come true.”

“I’ve achieved everything in Korea and Japan as a closer,” said Oh, who is also the 2005 KBO Rookie of the Year. “I wanted a new environment and was looking for motivation.”

After becoming a free agent from the Tigers, where he collected 80 saves and won the saves titles for the Central League of the Nippon Professional Baseball (NPB) the past two seasons, Oh has been aiming for a spot in the MLB.

The Cardinals said they have been watching Oh since 2009, and they met his agent during the Winter Meeting last month, while Oh was being investigated by Korean prosecutors for non-sports related illegal gambling in Macau. He was later fined a relatively minor 7 million won, with prosecutors acknowledging that Oh didn’t have a gambling problem.

Oh later received a half-season suspension - equivalent to 72 games - for the same charges from the KBO if he returns to a Korean professional baseball club.

The Cardinals said they had agreed to the terms with Oh before the suspension was announced.

The Missouri club has a history of trying to sign talented Asian players in recent seasons, including other Koreans.

Earlier this winter, they unsuccessfully bid on former Nexen Heroes slugger Park Byung-ho, who later signed with the Twins through the posting system, before also failing to outbid the Pirates for infielder Kang Jung-ho.

“As we stated a few years back, we were going to spend some energy and resources trying to get a better understanding of the Asian market, specifically what was happening in Korea and Japan,” said John Mozeliak, general manager for the Cardinals. “And ironically, we were able to end up signing a player who is actually Korean, but played in Japan.”

Mozeliak added that the team plans to use Oh as a setup man for closer Trevor Rosenthal, who set a franchise record with 48 saves last season and finished second in saves in the National League of the MLB.

“I think a lot’s been made of Mr. Oh’s success, and that’s obviously one of the things that attracted us,” Mozeliak said in a press conference. “It’s going to be a competitive camp, and having his arm and what he’s capable of doing competing for hopefully a late-inning role.”

Oh, who was given No. 26 jersey, will join other Cardinals relievers like Jonathan Broxton and Kevin Siegrist, as well as Jordan Walden. Last season, the Cardinals had the second-best ERA in the NL at 2.82.

Oh, who is also a member of the gold medal-winning Korean team at the 2008 Beijing Olympics, has been known for his strong fastball and stability. The five-time KBO saves title winner amassed a 1.81 ERA with 772 strikeouts in 646 1/3 innings in his 498 games played in Korea and Japan.

The pitcher was listed to the Cardinals’ 25-man roster right after the signing and will return to Korea today.