Genesis plans are detailed at show in Detroit

Genesis plans are detailed at show in Detroit 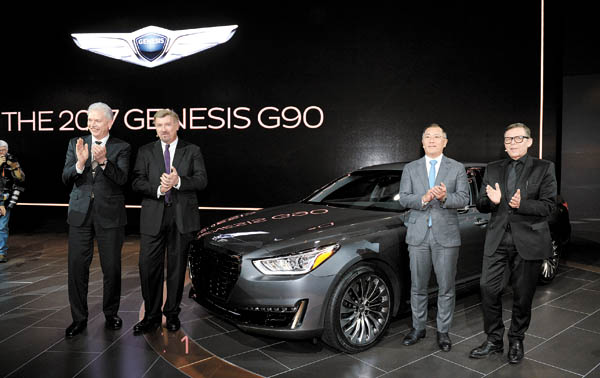 Hyundai Motor has revealed some of its strategies for its new luxe brand Genesis for the global market.

In a press day event Monday at Detroit’s North American International Auto Show, one of the four main motor shows in the world, the nation’s leading automaker said it aims to sell 100,000 Genesis brand cars globally by 2020.

Genesis’ flagship sedan G90, which is being sold as the EQ900 in Korea, made its global debut at the COBO Center at the motor show.

The car is in production at the company’s Ulsan plant in South Gyeongsang and will be rolled out to customers in North America later the year. The flagship sedan will be offered with two engine types - the Ramda 3.3 V6 Turbo GDi and Tau 5.0 V8 GDi.

Hyundai displayed a total of 16 cars in Detroit including the G90, Sonata sedan and Santa Fe SUV in a 1,530 square-meter showroom.

“We will introduce six new Genesis-brand cars by 2020,” said Hyundai Motor’s Vice Chairman Chung Eui-sun. “We will expand the territory for the Genesis brand in stages and are considering launching this in other key markets including China and the Middle East, although specific schedules aren’t yet decided.”

“We can say that the launch of the Genesis brand is successful if we sell an average of 30,000 Genesis cars per year [before the lineup expansion],” Han Chang-hwan, senior vice president at Hyundai said. “We currently hope to sell 5,000 units of the G90 and 25,000 units of the G80 [the existing second-generation Genesis sedan renamed G80) per year. We aim to sell 100,000 Genesis cars by 2020.”

“People say that the popularity of SUVs will continue in the next four to five years due to low international prices and I agree,” said Chung. “We have reflected such a trend in our car development process.”

Hyundai didn’t conceal its hopes that the Genesis brand will attract more young consumers fond of brands such as BMW and Audi in both the local and global markets.

“In Korea, we will strengthen our marketing for young people in their 30s and 40s for the G90, G80 and [the mid-size sedan] G70 in the next five years,” said Cho Won-hong, senior vice president of Hyundai. “Instead of focusing on introducing the world’s first auto technologies, we will try to provide features that are really necessary for drivers and passengers on our cars.”

Vice Chairman Chung said, “The reason we named the luxe brand Genesis instead of Equus [the former flagship sedan of Hyundai Motor] was because Genesis was more widely known to consumers here. I heard that Hyundai employees here greatly welcomed the company’s naming of the brand.”

Regarding production plans, the company said it isn’t considering expanding assembly lines since it already is building two plants in China and one in Mexico.