Partial accord for sickened workers

Partial accord for sickened workers 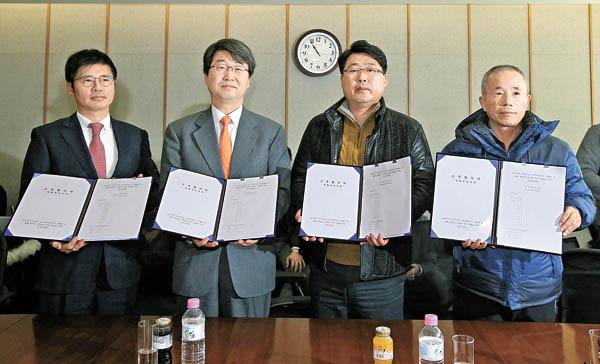 Negotiators engaged in the dispute surrounding workers who allegedly caught various cancers at Samsung Electronics’ semiconductor and LCD factories hold up agreements at a law firm in central Seoul on Tuesday to establish an external industrial disaster-prevention committee. The agreement is an initial step to end the nine-year-old conflict. From left: Baek Soo-hyun, a senior vice president of Samsung Electronics; Kim Ji-hyung, head of the arbitration committee; Song Chang-ho, representative of the family countermeasure committee; and Hwang Sang-gi, founder of Banolim. [NEWSIS]

Samsung Electronics on Tuesday came one step closer to ending a nine-year dispute over leukemia and other diseases allegedly caused by toxic chemicals at its semiconductor and LCD factories.

An arbitration committee representing the three parties involved in the high-profile conflict - Samsung Electronics, relatives of sick workers or workers who died, and a civic group called Banolim - said they signed Tuesday an agreement at a law firm in central Seoul on one of three terms of arbitration proposed to resolve the issue.

To “prevent disaster,” the three parties agreed to set up an independent body responsible for assessing and monitoring the toxicity levels at manufacturing facilities. The body will be headed by Seoul National University’s labor law professor Lee Cheol-soo and include two other experts, who will come up with measures to improve factory environments and monitor Samsung’s follow-up measures over the next three years.

The other two terms of arbitration involve an apology and compensation. Negotiations over the two issues are still under way. Samsung and Banolim remain clearly divided over the definition of victims and compensation boundaries.

“The fact that the respective parties have arrived at a conclusion about an issue that has gone through a painful period of conflict is a meaningful event,” said Baek Soo-hyun, a senior vice president of Samsung Electronics and chief negotiator for the company. “We will need some time to deliberate on the dates for additional negotiations.”

But the controversy won’t be over until agreement on all three issues is reached, according to Hwang Sang-gi, father of one of the Samsung workers who died, on a radio show Tuesday. “We haven’t had a chance to negotiate an apology and compensation as Samsung has refused to do so,” he said.

He added that Banolim will hold a press conference today at the company’s headquarters in Seocho, southern Seoul. Hwang’s daughter Hwang Yu-mi died of acute leukemia in March 2007 after working at Samsung’s semiconductor factory in Giheung, Gyeonggi.

Hwang is a founding member of Banolim, a Korean acronym for “an organization devoted to protecting the health and human rights of semiconductor laborers.” Banolim, made up of relatives of former Samsung factory workers as well as some civic activists, has been waging a sit-in in front of Samsung Electronics’ Seocho headquarters with loudspeakers and leaflets.

After Banolim’s negotiations with Samsung stalled for years, some of its members left the organization to launch the so-called “family countermeasure committee” last September. That led to the three parties being part of the negotiations.

Samsung has been paying compensation to some wokers who fell ill through a seven-member compensation committee set up last Sept. 3 at the recommendation of the arbitration body. A group of 150 people who got sick at semiconductor or LCD factories belonging to Samsung or its partner companies have applied for compensation and over 100 have already received it, according to Samsung.

But that compensation comes with conditions. The recipients should have worked at least a year at semiconductor or LCD producing facilities. The types of diseases covered are limited to breast cancer, brain tumors, leukemia, lymphoma and multiple myeloma. Banolim is against those restrictions.

It was Hwang Yu-mi’s death that triggered the acrimonious dispute at the world’s No. 1 producer of memory chips and smartphones. After working at the Giheung chip factory from January 2004 through July 2005, she was diagnosed with acute leukemia in 2005 and died in March 2007. She is assumed to have been exposed to toxic benzene and radiation. Banoilim says 76 people have died of diseases contracted from Samsung facilities.

Her father filed claims for relatives of the victims of industrial disasters with the Korea Workers’ Compensation and Welfare Service three months after her death. As publicity grew about her case, victims and their relatives going through similar hardships launched Banolim in front of the Giheung factory in November 2007, embarking on a lengthy battle to, in their words, “clarify the truth behind the leukemia cases and secure basic labor rights.”