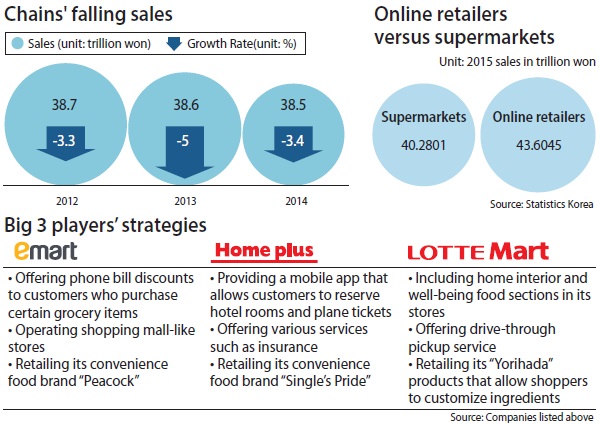 Local supermarket chains are offering a wider range of services, from travel booking to drive-through pickup and gourmet convenience food, in a bid to attract more customers amid increased competition from online retailers.

The big three supermarket chains have been struggling due to various government regulations, such as one that requires them to be closed on the second and fourth Sundays of each month to protect small markets.

Compared to the supermarket chains, online retailers and convenience stores have been faring well. In fact, online retail sales exceeded those of brick-and-mortar supermarkets last year for the first time.

“We are trying new things in order to be competitive in the industry,” a representative for a major supermarket chain said.

Homeplus said the company launched the “Byeol Byeol Hotel” reservation app with local travel agency Hotel Join on Sunday. This is the first time any local supermarket is providing an app service other than its own shopping app.

“We plan to provide a mobile app that allows customers to not only reserve hotel rooms, but also reserve plane tickets and rental cars, by early this year,” said Ko Sang-hyuk, a manager at the company’s service department.

Homeplus already operates an online mall that provides moving and rental car services, and it is expanding it to the mobile realm with its newly-launched hotel reservation service.

“The price for services will be extremely cheap compared to others,” a representative for Homeplus said. “We plan to satisfy our existing customers and attract new customers with this new mobile app, instead of making profit.”

Meanwhile, E-Mart, as the only supermarket chain to sell so-called altteul thrifty phone plans, hopes to have 10,000 users by this year. Customers with the phone plans receive a discount of up to 45,000 won ($37) on their monthly bill when they purchase certain grocery items, including Ottogi and Pulmuone products. A total of 85,000 customers have bought thrifty phones from E-Mart.

Lotte Mart is looking to expand its drive-through service called “Drive & Pick,” where customers can order products online and pick them in-store without getting out of the car. The company currently offers the service at its Nowon District branch in northern Seoul and says it plans to operate one or two more branches with the service by early this year.

Local supermarkets are also trying to differentiate their stores from others in order to attract more customers. The E-Mart Town shopping complex in Ilsan, Gyeonggi, for example, offers grocery shopping at E-Mart, electronics at Electro Mart and home goods at The Life.

Lotte Mart opened a futuristic store that has home interior and well-being food sections at the Yangdeok branch in Changwon, North Gyeongsang.

The three big supermarket players are competing intensely in convenience food products, where sales are expected to reach 2 trillion won this year. Supermarkets are selling products that their suppliers provide.