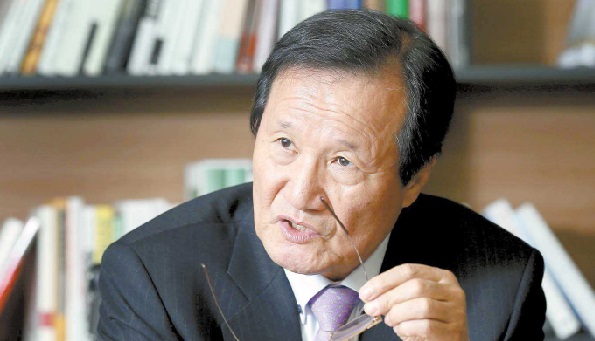 The Korean economy is struggling. National debt has significantly increased and the youth unemployment rate appears increasingly unsolvable. Some experts have predicted that the country could face a downturn this year similar to the global financial crisis in 2008.

Just before the New Year, Yoon Jeung-hyun, Korea’s former finance minister, sat down with JoongAng Ilbo columnist Kim Dong-ho to discuss the issues plaguing the national economy and the steps economic institutions can take to resolve these problems.

Yoon served as the director of the financial policies division in the Finance and Economy Ministry in 1997, in the midst of the Asian financial crisis, and went on to work at the Asia Development Bank. After returning to Korea, he worked as the head of the Financial Supervisory Service (FSS).

During the Lee Myung-bak administration, Yoon managed the country’s financial risks in the shadow of the global financial crisis.

Q. The Korean economy is in serious trouble. How would you evaluate the current situation?

A. It can’t be diagnosed without looking at the world economy. The one issue we need to seriously consider in 2016 are total exports, which dropped significantly from a year ago, probably about 20 percent. It’s hard to expect such a trend to improve this year.

It’s been seven years since the 2008 financial crisis, but the United States is the only country that is still obviously recovering from the downturn. The United States jolted the global economy by raising its benchmark interest rate by 0.25 percent in December despite the fact that it was part of efforts to normalize the American economy.

Excluding the United States, problems persist in Europe, China and Japan, and economic situation is even worse for Korea’s key export partners, including Russia, India, Brazil and Indonesia. Given that, it isn’t hard to predict that Korea’s exports will struggle - it’s the biggest part of the nation’s economy.

Besides exports, the domestic market is the next biggest concern, but it looks like the situation isn’t so different. The domestic market operates by investment and consumption. Conglomerates lead investment, but it looks like investment won’t be increasing in 2016 since politics, social affairs, culture, education and the labor market - all of which influence companies’ investment activities - are not expected to improve. Korea’s general election is this year, followed by the presidential election in 2017, so the country will be hard-pressed to get a boost from the political circle.

Additionally, consumption - the other factor that makes up the domestic market - has shrunk recently. Total household debt amounted to 1,200 trillion won ($988.4 billion) last year, which means that individuals aren’t able to spend, and it would be difficult to expect the government to increase its spending since it had a hard time providing funds from existing tax regulations. This means the Korean economy isn’t likely to improve, both in terms of investment as well as consumption.

The real estate market faces a number of problems. In your opinions, what are the solutions?

The real estate market has always been an Achilles heel with so many people on such a small piece of land. As national incomes have improved, so, too, has the quality of life, and that has influenced calls to improve residential environments. The real estate market saw a serious slump in late 2008, after the global financial crisis, and in last year. The market wasn’t creating anything in terms of business.

The government has come up with many initiatives to revitalize the market and I think there has been some progress since Choi Kyung-hwan became the finance minister. I remember that there were more than 1.1 million real estate transactions made in 2015.

Some experts believe the real estate market will cool down now that the United States raised its standard interest rate, and I’ve seen some moves to control the market in response - initiatives to stop the oversupply of new houses and tighter mortgage regulations.

We shouldn’t be too optimistic about the real estate market, but we also shouldn’t be too skeptical since it spurs all kinds of arguments on the market. I don’t think market competition will be too fierce this year. About 400,000 new houses were supplied last year, but that will likely decrease to 300,000 this year.

The youth unemployment rate is quite serious. What are the possible solutions?

It really is the country’s biggest problem. It concerns me when I imagine our young people wandering around he streets, deciding to delay their college graduation, spending their time in Internet cafes because they can’t find jobs. It really isn’t just a problem confined to the economic sector. We need to take a careful look at social affairs and education to solve the unemployment issue.

The government has called for labor reform measures to be passed, and it considered an efficient solution for solving the problem, but I think we need to improve our education system, which has been failing in both qualitative and quantitative terms.

This is such an unreasonable number and it makes business hard. In a company, an assistant manager-level worker generally manages two to three new hires; but these days, two to three assistant managers monitor just one new hire. Businesses need to expand their investments to create more jobs, but the country also needs to create an environment in which businesses can operate efficiently.

The National Assembly’s lack of progress on enacting reforms that encourage reasonable restructuring for businesses appears to be a major economic impediment. What do you think?

We are currently in an age of oversupply. Overall global export conditions have been worse, and the global demand is consistently decreasing. Local shipbuilders incurred about 7 trillion won in losses last year and the manufacturing industry has been troubled as well. Overseas, many companies are already restructuring and we need to do that, too.

Related laws pending in the National Assembly must be approved immediately in order to build up the necessary infrastructure for the restructuring; and I think that is the role of the government and parliament. But the National Assembly obviously isn’t doing a good job. If these issues aren’t resolved, businesses will hesitate to invest and that will stall the economy, leaving the young generation with fewer and fewer job options.