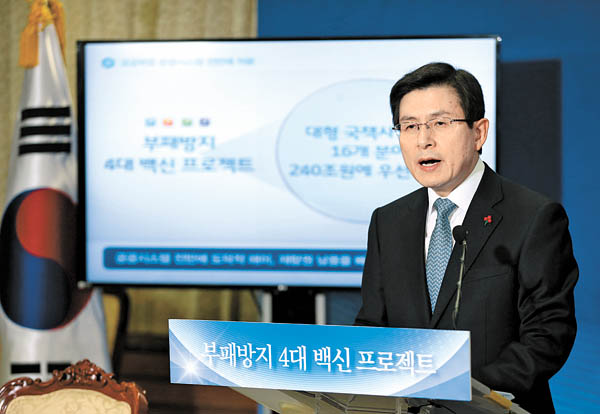 “In order to enhance our society and vitalize the economy, fundamental and thorough anti-corruption measures are needed in line with reform in the public sector,” Hwang said during a press conference on Tuesday.

Under the plan, a joint investigation team headed by a prosecutor will monitor preparations for the 2018 PyeongChang Winter Olympics using a 5.3 trillion won budget, while the establishment of a disaster and safety communications network is estimated to cost 1.7 trillion won.

The Office for Government Policy Coordination explained that the PyeongChang Winter Olympics project and the communication network’s establishment would be particularly scrutinized since those projects are imminent, with major funds expected to be used by 2017.

“So far, we have focused on responsive measures to punish corruption, but this kind of approach cannot fix the national damage already incurred,” he said.

“We will proactively prevent budget waste by adopting preemptive measures,” Hwang continued, adding that measures will be implemented starting this year.

Hwang explained that the government will monitor possible corruption in large-scale state projects as they are ongoing and take preemptive measures for the risks involved in big asset management.

He added that the government will share information on how state subsidies are used and introduce an internal monitoring system to strengthen control over national projects.

On Jan. 5, President Park Geun-hye said at her first Cabinet meeting of 2016 that rooting out corruption was a key objective for the year.

The president added that Korea’s ministries must work hard to eradicate corrupt practices and establish a monitoring system to prevent budget waste and improve transparency and fairness in major state projects.