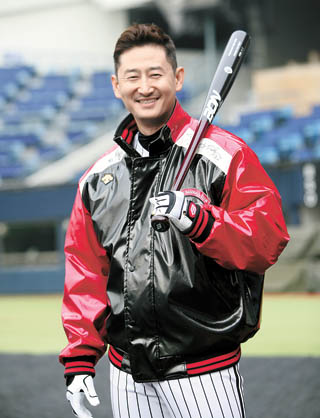 Last season was disastrous for the LG Twins.

They finished ninth in the Korea Baseball Organization (KBO) League, behind only rookie club KT Wiz, and then watched as their Seoul rival Doosan Bears claimed the championship.

For the upcoming season, the Twins are hoping to bounce back by using fresh, young players.

Manager Yang Sang-moon has said he will utilize their speed to quicken the tempo of the Twins’ game.

For veteran outfielder Park Yong-taek, the manager’s plan for the new season could be a challenge, as he’ll be pushed to keep up with the younger members of the squad.

The 36-year-old left-handed batter is a franchise star for the Twins, having played 14 years for the two-time Korean Series champions.

Park could go for a career 2,000 hits this season, as he’s currently just 126 behind. But the three-time Golden Glove winner says that what’s important is how he can contribute to the team.

In an interview with the JoongAng Ilbo last week, Park -- who signed a four-year deal worth 5 billion won with the Twins in 2014 -- said that he is willing to put his personal goals behind those of his fellow players.

A. You know in the past, we didn’t reach the post season for 10 seasons (laughs). I just spend time with my family to forget about it, but for post-season baseball, you are sort of forced to watch it. I think the Samsung Lions would have won the title if they’d kept their usual composure, but the Doosan Bears just got luck from the heavens. (laughs).

What are your thoughts on your 15th year with the Twins?

In the year kick-off meeting, we wore our new season uniform for the first time. Honestly, during the season, there are occasions when you don’t want to put the uniform on, but in the season’s first meeting, I just want to wear it. I hope everything goes as planned this year.

Many things were out of our control from the start. At the end of the day, injuries were to blame. Personally, I also got influenza right after the series opener. The bad start grew into a bad mind-set, and the whole season became difficult. It wasn’t a joyful season. But I don’t think we gave up.

People are still saying that the Twins will remain in the lower half of the standings.

Our concept is to create a new generation of the team. As a veteran player, this isn’t pleasing news. Now, I have to compete against young players. It will be best if the team can execute both a generational shift and get good results. But if I had to pick one, I’ll go for the generation change.

Manager Yang said that he will pursue baseball that emphasizes running. Is this worrisome to you?

Personally, I’m confident in my running. I’m prepared and I believe I can do well. In order to play running baseball, a player needs to have good speed and sense, but at the end of the day, he needs to have desire. I will aim to collect 30 stolen bases this season.

What gives you consistency in your performance?

Whatever I’m doing, I don’t give up easily. I also study and think about baseball a lot. When I see younger players, I see them working hard physically, but they don’t work on their brain. When I was young, I also practiced a lot, but I didn’t make big progress. I now realize I didn’t have any idea how to play baseball.

Young Twins players say they’ve gotten a lot of help from you. What can you say about this?

Actually, I’m the kind of guy who likes to lecture people, so I like young players a lot (laughs). But I think with the team, you got to have experienced veterans who can positively influence junior players. By playing and talking together, young players can take advantage of their seniors and absorb information on their own.

Are you preparing to wrap up your career with the Twins?

Not yet. I want to play until the age of 45 (laughs). Still, I admit that it’s about time for me to start preparing to wrap up my career. I signed a big contract with the Twins in 2014. In order to prove my value, I need to break the all-time hit record [2,318] set by Yang Joon-hyuk. I think that’s the answer to pay back the support that has been given to me.