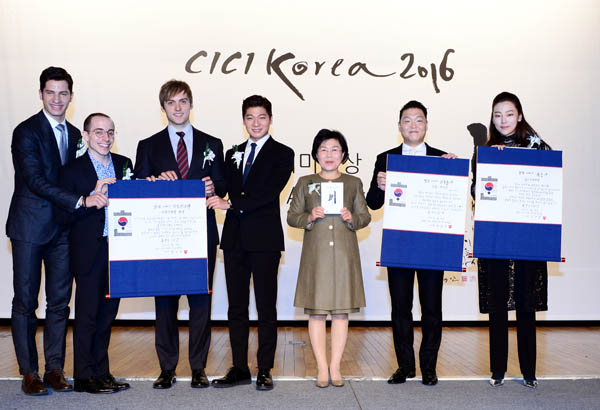 It’s been more than three years since one peculiar-looking Korean rapper named Psy galloped across the globe with his song “Gangnam Style.”

There’s no doubt that he’s been the impetus behind the recent spread of K-pop and Korean culture to people around the world who may not even know where Korea is located. But it seems like this country can’t thank him enough.

On Tuesday, world superstar Psy - who came back with a new album at the end of last year - was granted the Stepping Stone Award, the highest honor given out at the Corea Image Communication Institution (CICI) each year.

The 11th Korea Image Awards was held at the InterContinental Seoul COEX in southern Seoul, with some 700 international and local opinion leaders in attendance including Minister of Culture, Sports and Tourism Kim Jong-deok, former Prime Minister Han Seung-soo, Chairwoman of the National Assembly Foreign Affairs and Unification Committee Na Kyung-won, as well as ambassadors to Korea including U.S. Ambassador Mark Lippert.

According to CICI President Choi Jung-wha, Psy was given the Stepping Stone Award in recognition for promoting “the creativity of Hallyu,” explaining that Psy’s megahit music video of “Gangnam Style” and its longstanding record on YouTube as the most-watched video of all time is a classic example that shows the potential of Hallyu, or the Korean Wave.

“I started singing because it’s what I love to do and I will continue to do it as long as I can,” Psy said as he accepted the award. “I see a bright future for K-pop.” Psy was awarded the same prize in 2013.

The event’s second-highest prize, the Stepping Bridge Award, went to four panelists of “Non-Summit” on JTBC: Alberto Mondi, Guillaume Patry, Zhang Yuan and Tyler Rasch. This award is given to non-Koreans to recognize their promotion of Korean culture abroad. “Using fluent Korean, the four members enthusiastically and affectionately worked hard on the program to talk about their own countries and Korea,” Choi said, praising their role in building bridges between Korea and the world.

“We are so honored to receive this award,” said Rasch. “Whenever we shoot for the program, we are aware that we are taking on a big role of being a bridge between Korea and the rest of the world. Thank you for appreciating our role.”

The final award, the Flower Stone Award, went to violinist Clara Jumi Kang. Although she was born and raised abroad, enrolled at Germany’s Mannheim Musikhochschule at the age of 4 as the youngest student ever accepted to study there as well as at Julliard School in New York with a full scholarship, she came to Korea to study at the Korea National University of Arts, following her teacher Kim Nam-yun.

Every year, CICI not only recognizes those who have helped promote the image of Korea across the world, but also holds the Culture Communication Forum, inviting cultural leaders from different countries to experience Korea and openly discuss their thoughts and ideas on the image of Korea and how the country should go about promoting it.