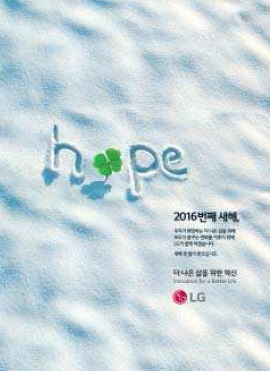 As I always do on the weekends, I was lazily flipping through the newspapers that had piled up over the week when a full-page advertisement from LG Group caught my attention.

It wasn’t like any other advertisement that I’ve seen in a newspaper, where the product is nicely presented alongside big flashy lettering or a good-looking celebrity.

Instead, the advertisement was very simple. In the middle of the page was a four-leaf clover, which is widely regarded to bring good luck, sticking out of what seems to be snow-covered ground. The clover was replacing the letter “o” in a four-letter word scribbled on the ground: “Hope.”

The advertisement may be a message LG is sending back to itself, reassuring that there’s still hope even as the conglomerate faces the biggest struggle in its history.

But to me as a reader, it seems to speak of a feeling desperately needed in Korea.

In the past 40 years of my life, I have lived through the ups and downs of Asia’s fourth-largest economy, from the booming years of the 1980s, often referred to as the “miracle on the Han River,” to the devastating Asian financial crisis of the late 1990s, which led to the layoffs of thousands, the breaking up of families and even a large number of suicide. I witnessed first hand the most recent global economic turmoil of late 2008 and its aftershock, which can still be felt today.

But throughout all of these crises, I’ve maintained blind optimism at the turn of the New Year. Things will somehow improve, life will rebalance and the economy will eventually find its feet. And why not? Our parents literally created a miracle, turning Korea from a poverty-stricken country after the civil war in the 1950s to an influential international economy, despite its relatively small market and population.

Even after the IMF crisis and the most recent crisis in ’08, Korea still was able to become a leading, technologically advanced economy. Korean computer chips and smartphones dominate the global market, Korean cars are popular around the world and large-scale vessels built in Korean shipyards sail the seven seas - not to mention the Korean-built skyscrapers becoming landmarks in major global cities.

That same blind optimism seems to be lost this year.

I no longer have confidence in the government’s reports that the Korean economy will be able to reach 3 percent growth. I’m not even sure if the Korea’s economic foundation is as solid as the government claims.

As I watched President Park Geun-hye’s televised address - which tried to tackle all the above issues, reassuring the likelihood of 3 percent growth and downplaying rising debts - I couldn’t believe how cynical I had become.

Is the debt situation really being handled well? Will the economy be able to reach the 3 percent expansion so valiantly advertised by government officials including Finance Minister Choi Kyung-hwan, who celebrated his last day on Tuesday, and his successor Yoo Il-ho?

Is there really hope for the Korean public, especially the middle- and lower-income households that constitute the backbone of this country?

The biggest reason so many people have lost faith in the current administration is that it failed to understand public sentiment and communicate effectively in times of crisis. This became apparent during the Sewol tragedy in the summer of 2014, and was again confirmed in many occasions thereafter, including the Middle East respiratory syndrome (MERS) situation and the most recent “Korean Black Friday” sales.

Looking at the economic indices, yes, the Korean economy was showing signs of positive recovery before the Sewol or the MERS situations occurred. But public sentiment immediately froze, to the point where it did hurt the economy to its very core.

The government failed to understand the epicenter of the problem, and so only searched for short-term solutions like the supplementary budget in the second half of 2014, the lowering of key interest rates and most recently the discount events. Yet all of these efforts couldn’t boost the economic growth rate to the much-sought 3 percent.

Why? Even when the government announces it is increasing spending, encourages people to borrow so that they can buy and then gives them discounted goods to spend their money on, the fundamental problem remains unsolved - uncertainty. That uncertainty can only be solved when the government patiently and consistently communicates the vision it is trying to achieve to the public, opposition parties, the labor union and even the common Joe.

As I watched U.S. President Barack Obama shed tears for the victims of gun violence while stressing that change will come even if it takes some time, I couldn’t help but hope President Park would have the same emotional approach when she addressed the Korean people.

Instead, when she addressed the important issues of economic reform laws, she was more focused on drumming up a sense of urgency, as if an immediate crisis would happen if the lawmakers failed to pass the bill her administration has turned in. I couldn’t find any empathy or compassion capable of making the public realize the importance of the bill she’s trying to pass, no matter how significant her legislation is.

We’re just in our second week of 2016. I desperately wish that hope is still alive this year, and that it can be spread with improved communication and a better understanding of what everyday people actually need.