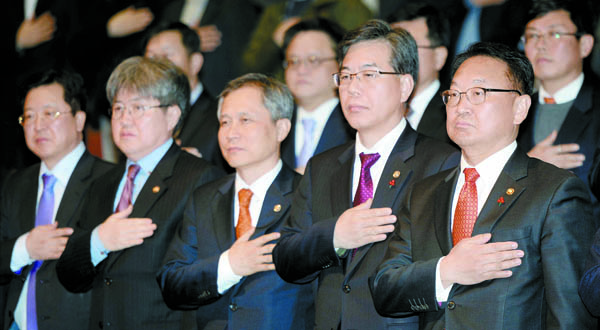 The third economic team of the Park Geun-hye government has embarked on its mission to complete the administration’s three-year economic innovation plan, mainly completion of structural reforms.

Yoo Il-ho, the new deputy prime minister for the economy and finance minister, took office on Wednesday and pledged to carry out the reforms.

“The only solution to the problems is structural reform,” he said.

Completing reform of the labor market, education, lax management of public institutions and fragile financial markets is the most urgent task, Yoo said.

The politician-turned-minister urged lawmakers to pass a series of bills related to labor market reforms.

Yoo, who is a close political ally of President Park, has a team consisting of Joo Hyung-hwan, the new minister for trade, industry and energy, who took office on the same day; Kang Ho-in, minister for land, infrastructure and transport; and Lee Dong-phil, minister for agriculture, food and rural affairs.

But it is not a good time to be taking the wheel of the Korean economy.

The new economic czar is facing a myriad of challenges as the Korean economy is on the brink of falling into low growth due to falling exports and high financial volatility.

Amid a prolonged global slowdown, Korea’s key growth driver, exports, are in an unprecedented decline. Exports continued falling every month in 2015.

Although the country recorded a $90.4 billion trade surplus, the largest ever, it was a surplus that was triggered by imports tumbling at a greater rate than exports.

The poor performance in trade was attributable to the global downturn, shrinkage in global trade and low oil prices.

The new trade minister, Joo Hyung-hwan, made a visit to an export company in Bucheon, Gyeonggi, before his inauguration ceremony on Wednesday, showing a determination to restore export growth.

Yoo is also scheduled to visit Pyeongtaek Port in Gyeonggi, a key port for outbound shipments, as his first field trip as finance minister.

To achieve the government’s goal of 3.1 percent GDP growth this year, it is necessary to have export growth back on track. The government forecasts exports will make a 2.1 percent rebound in 2016, but China’s stock market crash and sluggish economic growth and slower-than-expected recovery of the U.S. economy are serious threats to the goal.

“[The government] has expected a gradual recovery in exports, but the China risk from the very beginning of the year was unexpected,” a Trade Ministry official said. “The two new ministers’ visits to export-related areas give the message that they will focus on exports.”

China is casting a dark cloud across the entire Korean economy.

In the first week of January, the Kospi lost 3.4 percent on news of China’s first-ever closure of its stock exchanges because heavy losses triggered so-called circuit breakers. Foreign investors have been selling local shares since the first interest rate hike by the U.S. Federal Reserve in December.

“The U.S. rate hikes, unstable economic conditions in emerging markets and low oil prices are not constants but variables,” Yoo said. “Risks stemming from those factors will not be new but take different forms, so we should always take preemptive action.”

Yoo will meet with Lee Ju-yeol, governor of the Bank of Korea, on Friday to discuss cooperation.