Veteran dancer takes to the stage on his own

Veteran dancer takes to the stage on his own 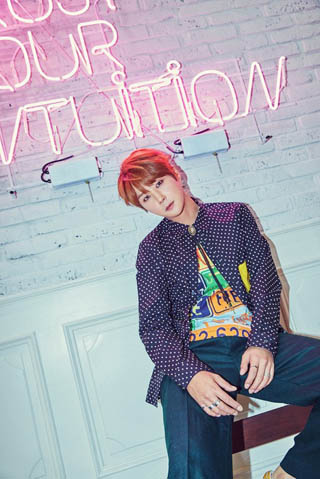 Shin Hye-sung has been performing as part of the K-pop boy group Shinhwa for the past 18 years. The 36-year-old has also been releasing solo albums on and off, but he says he gets nervous and excited whenever he comes out with something new.

To mark the 10th anniversary of his first solo album this year, Shin has filled his new solo album, titled “Delight,” with dance music.

“Delight” came out on Tuesday and has five tracks, including the title track, “Roco Drama.”

“People may think it is not a big deal for me to sing and perform a dance song because I’ve been performing as part of Shinhwa, but it is a big challenge,” Shin said during a recent interview in a cafe in Gangnam District, southern Seoul.

Shinhwa broke into the music scene in 1998 and it is one of the longest-running K-pop groups.

All the members are approaching their late 30s, but their dance performances are still as fierce, stylish and synchronized as in the early days of their careers.

Below is an edited excerpt of Shin’s recent interview with Ilgan Sports, an affiliate of the Korea JoongAng Daily.

Q. Before, you never featured a dance song on your solo albums. Why is this time different?

A. People around me were surprised to find a dance tune on my newest solo album. You know, I’ve been singing ballad songs whenever I released solo albums in the past, but I wanted to show a different side of me this time to mark the 10th anniversary of my first solo album’s release.

But you’ve always danced when you performed with Shinhwa. Dance music doesn’t seem new to you.

Solo dance is different from dancing with my bandmates, because I’m not technically an excellent dancer, and the fierce dance-style of Shinhwa is not suitable for the solo stage. So I tried to find a genre of dance that suits me the most.

Did you receive any feedback about your solo dance from other Shinhwa members?

I didn’t show them my dance yet, but Eric texted me after he watched a teaser video of mine and said he wanted to see a full version of my dance. I’m afraid of their feedback because Kim Dong-wan and I often compete with each other for the worst dancer [within Shinhwa] (laughs).

The latest trend in the music industry is collaboration, but this album is filled with only your solo songs.

I collaborated with other musicians about two years ago and I worked with musicians of various genres back then. I just wanted to fill the album on my own this time.

How long did it take you to complete this album?

I think I’ve been working on it since February last year, after I wrapped up promotion for the [previous] Shinhwa album. I had to find a dance song that could suit me.

You don’t often appear on reality TV shows to promote your albums.

I find it awkward to make appearances on TV shows without the other members [of Shinhwa]. I consider myself an ordinary person. I love to stay at home and watch drama series and films.

I’m not confident [in appearing on TV], but I’ll make as many appearances as I can this time because I’m releasing this album in return for the love of my fans.

You’ve been in this industry for 18 years and almost all K-pop singers are younger than you. How do you feel when newbie singers knock on the door of your waiting room to say hi?

I’m so nervous just thinking of it. If I’m with my bandmates, I would think nothing of it, but I’m kind of an introvert and don’t know what to say [to newbie singers].

Many idol groups choose Shinhwa as their role models. How do you feel about that?

They think highly of us because we’ve been together for this long. But I want to tell them that they shouldn’t stop upgrading their music.

Is there any other genre of music you wish to do in the future?

I don’t have room for thinking about other music yet. I’ll be busy promoting my solo album starting next week, and I have solo concerts scheduled between late February and March. After that, I should work on the next Shinhwa album. This is going to be a busy year, indeed.