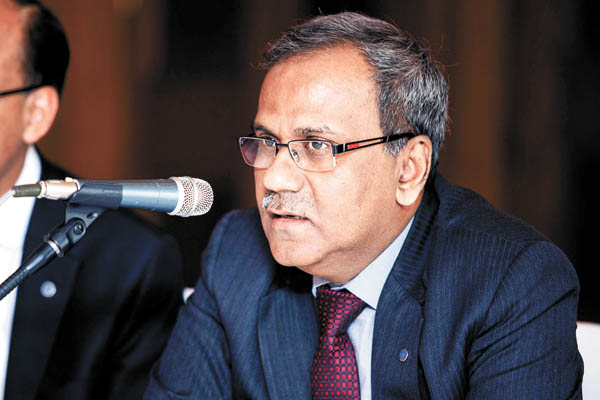 B. Sriram, managing director at SBI, speaks at a press conference at the Millennium Hilton hotel in central Seoul on Wednesday. [SBI]

The State Bank of India (SBI), the largest bank in India in terms of assets, opened a branch in Seoul on Wednesday.

The financial institution said it expects to play an important role in strengthening the economic partnership between Korean and Indian companies.

“Our extensive experience in supporting Indian corporates in their foreign endeavors and global corporates in their expansion into India, as well as in other markets, shall be the primary value proposition for our business relationships in Korea,” B. Sriram, managing director at SBI, said during a press conference at the Millennium Hilton hotel in central Seoul on Wednesday.

A total of 443 local companies, including Samsung Electronics and LG Electronics, currently operate offices in India, according to the bank.

“India is the 15th greatest economic partner to Korea, and the trade volume between the two countries amount to 18 billion won [$14.9 million],” Sriram said, “and the volume rose 8.71 percent in 2015 from previous year.”

The company’s decision to open a branch came after the Comprehensive Economic Partnership Agreement signed by the two countries in 2009.

SBI’s Seoul branch plans to offer a range of services for companies in trade finance, corporate deposits and bilateral and syndicate loans, according to the company. It will also allow workers from India and Nepal who work in Korea to transfer money back to their home countries.

The bank has total assets worth $328 billion and over 20 percent market share of the Indian banking sector as of March 2015. The company operates over 194 branches and offices in 36 countries around world, including the recently opened Korean branch.

SBI has operated a representative office in Korea for the last two years and received approval from the Korean government last year to open a full branch.

“Korean regulators were extremely supportive of us, and it is the one of the fastest branches that transformed from a representative office,” Sriram said.

The branch is located in Gwanghwamun, central Seoul, and has seven employees, five of whom are Korean.

SBI also signed a deal with the Export-Import Bank of Korea to raise the credit limit for loans provided by the Korean bank to companies looking to operate in India from the previous 700 million won to 1 billion won on Wednesday.

“The deal will help local companies enter India with a low-interest rate loan program,” said a representative of the Export-Import Bank of Korea.