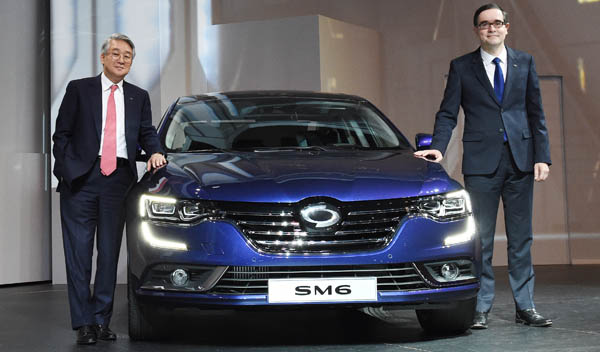 In an event held in Taean County, South Chungcheong, on Wednesday, RSM revealed the SM6 - known elsewhere as the Talisman - for the first time to local media.

The car was jointly developed by RSM and Renault of France, and has been highly anticipated by local consumers since it was first introduced in the global market last year.

The company said it recently started producing the SM6 in its Busan plant and will start selling the car in March. 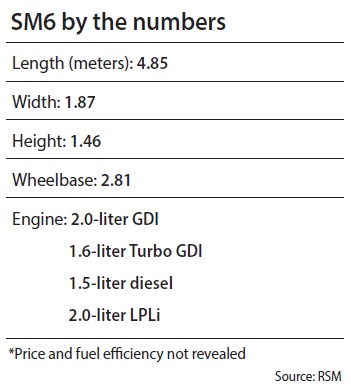 “The RSM had gone through hard times [financially] in 2011 and 2012,” said Francois Provost, CEO of RSM. “But we successfully overcame the hardships and I can say that the SM6 is a new take off for us. I believe SM6 will change the trend of the mid-sized sedan in Korea.”

The company said the SM6 will be offered in four types ? a 2.0-liter GDI, 1.6-liter Turbo GDI, 2.0-liter LPLi and 1.5-liter diesel ? to meet the different needs of consumers.

The SM6 has also added some safety features, including a heads-up display and all-around parking sensor. In order to make driving a little more fun, the SM6 is also includes a D-cut steering wheel and a semi-bucket seat.

RSM didn’t downplay its ambitious goal of reclaiming the No. 3 spot in the Korean market in sales, held by GM Korea for the last six years. The company currently ranks fifth.

RSM’s share of the Korean market was 4.3 percent last year, which was even lower than the nation’s smallest automaker, Ssangyong Motor, which reported a 5.4 percent share of the market thanks to its compact SUV Tivoli. GM Korea sold 158,404 cars last year in the country, followed by Ssangyong (99,664) and RSM (80,017). The company said the SM6 will help the RSM to double the figure this year.

“I think this is our biggest chance to step up as the No.3,” said Park Dong-hoon, executive vice president of Renault. “We expect to sell 50,000 SM6s this year.”

The SM6 is expected to compete with the existing mid-sized sedans that have been dominating the market, such as Hyundai Motor’s Sonata and Kia Motors’ K5.

The model is newer than its rivals, but concerns remain over whether the SM6 can offer features like high fuel efficiency, which are essential in the mid-sized D-segment sedan market consisting mostly of customers in their 30s and 40s.

The company has yet to reveal fuel efficiency and pricing details yet.

“Since we will start selling the car in March, we decided to save the number this time because revealing such features would stir up all kinds of controversy,” said VP Park. “We are carefully working on pricing to efficiently compete in the market.”

There are worries that the SM6 also might take customers who are interested in purchasing the SM5, another mid-sized sedan in the company’s lineup, and or the large size sedan SM7. This happened last year with Hyundai Motor’s Aslan, which failed to attract consumers due to its sandwiched position between the Grandeur and Genesis sedans.

“We don’t worry abut that problem much,” said VP Park. “The SM6 is a totally different car from existing models and we market it the model as such.”