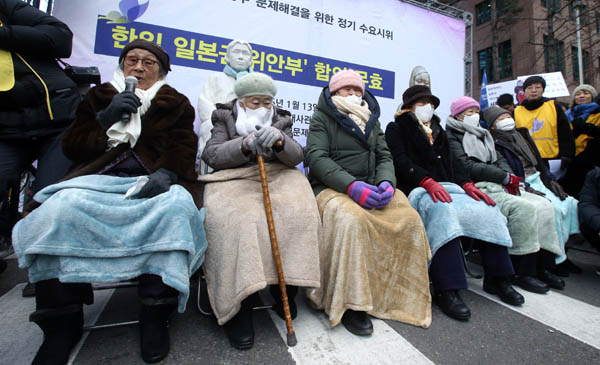 Some of Korea’s surviving ‘comfort women,’ who were sexually enslaved by Japanese military during World War II, participate in the weekly Wednesday rally in front of the Japanese Embassy in central Seoul to demand compensation and an apology from the Japanese government. [NEWSIS]

President Park Geun-hye on Wednesday defended a breakthrough agreement with Tokyo that effectively resolved a long-held dispute over Japan’s sexual enslavement of Korean women during World War II, emphasizing that the government had done its best to obtain the best possible outcome given the circumstances.

“Over the past 24 years, since this issue has been raised, it has been a very difficult problem that no government has been able to properly deal with, and some [administrations] even gave up on it,” the president said in response to a reporter’s question on the deal during an annual media conference.

“However, you have to recognize that we have with our utmost sincerity done the best that we could on such a difficult issue,” she continued, referring to the women and girls who were forced to serve in frontline military brothels. These victims are euphemistically known as “comfort women.”

“We can’t always be 100 percent satisfied in negotiations because of various practical constraints,” Park added.

The agreement on Dec. 28, struck after more than a year of negotiations between the South Korean and Japanese foreign ministries, includes an apology from Japanese Prime Minister Shinzo Abe. It also calls for the creation of a state-backed fund for the victims amounting to approximately 1 billion yen ($8.3 million).

The shortage of time was prioritized, Park said, pointing out that there are just 46 survivors left, who average around 89 years old. “We needed to receive an apology before another person dies and to help alleviate the sorrow in their hearts.

“That is why I have requested that the Japanese government resolve this problem, and unlike previous presidents, I went to the United Nations and many other international conferences and publicly spoke on this issue.”

Over the past year, Foreign Ministry officials have on more than 15 occasions visited the surviving victims and listened to their perspectives, she said.

The president said she believes the agreement satisfies those requirements and went on to emphasize that there was “nothing more, nothing less” than what was stated in the foreign ministerial press conference.