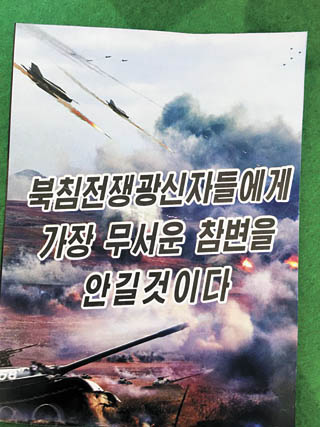 A propaganda leaflet sent across the border by the North Korean army in a big plastic balloon reads, “The most severe punishment will be imposed on warmongers looking for the invasion of North Korea.” [NEWSIS]

A North Korean drone flew over the border on Wednesday and returned to the North after warning shots were fired by South Korea, the latest exchange between South and North after propaganda broadcasts were resumed last week.

The South Korean military reported the aerial vehicle was spotted flying near the Dorasan observation post at around 2:10 p.m., Wednesday, which prompted the military to fire 20 rounds of warning shots with K-3 machine gun. The unmanned drone returned home immediately after the shots.

The military said the drone infiltrated tens of meters into the South past the military demarcation line dividing the two Koreas.

“The North Korean military drone was spotted flying toward the demilitarized zone from near the Kaesong Industrial Complex,” said a military official.

The appearance of the North Korean drone came amid heightened tensions on the heavily armed border after the South resumed propaganda broadcasts Friday in response to the North’s nuclear test on Jan. 6.

Seoul’s move to blare messages critical of the Kim Jong-un regime and bouncy K-pop music indicates that it views Pyongyang’s nuclear test as a violation of an agreement reached last summer in which the South said it would stop the broadcasts as long as there was “no unusual activity” from the North.

It is likely that the North sent a drone to study movements of frontline military units, which have been on the highest level of alert since the resumption of the propaganda broadcasts last week, which the North brands “an act of war.”

The sighting of the drone came after North Korea propaganda leaflets were found outside the southern part of the demilitarized zone in northern Gyeonggi.

Printed in color, some with graphic background depicting tanks and fighter jets, the leaflets demanded the South halt its propaganda broadcasts.

The postcard-sized leaflets, flown over the border in big plastic balloons, carried warnings such as, “The most severe punishment will be imposed on warmongers looking for the invasion of North Korea.” Another leaflet read, “Immediately stop the anti-North broadcasts that trigger a war!”

The military said the leaflets came over the border between Tuesday afternoon and early Wednesday morning. The exact number of leaflets that ended up in the South is not yet known, but estimated to be several thousands.

The drone flight and leaflet dropping are a lesser degree of threat than seen last August when the North Korean military allegedly planted land mines that maimed two South Korean soldiers and fired across the border in the direction of South Korean loudspeakers blaring propaganda, stoking military tensions to a point not seen in years.