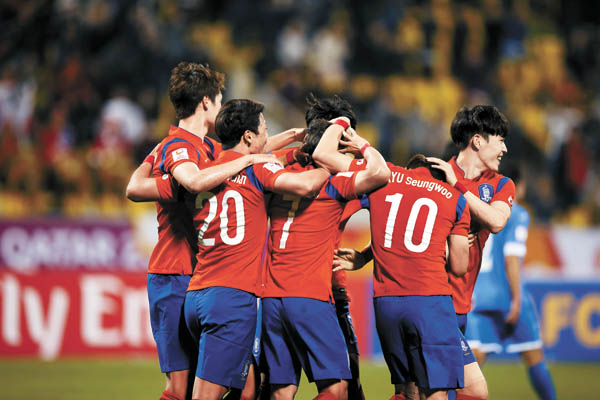 Korea Under-23 football midfieider Moon Chang-jin, center wearing the No. 7 jersey, is congratulated by teammates after scoring a goal against Uzbekistan at their first Olympic qualifying tournament match in Doha, Qatar, on Wednesday. Korea won 2-1 with both goals scored by Moon. [KOREA FOOTBALL ASSOCIATION]

Two goals from midfielder Moon Chang-jin led Korea to a 2-1 victory over Uzbekistan, giving the men’s Under-23 football team a good start at the Olympic football qualifying tournament on Wednesday in Doha, Qatar.

At Suhaim Bin Hamad Stadium, Korea collected its first win in the Group C match of the Asian Football Confederation Under-23 Championship, which serves as the regional qualifier for the 2016 Summer Games in Rio de Janeiro. In this 16-nation tournament, the top three countries earn their ticket to Brazil.

The 2-1 victory over Uzbekistan, however, at this moment puts Korea in second place in Group C because Iraq defeated Yemen 3-0 on the same day and topped the group by goal difference. The top two countries in each group advance to the quarterfinals.

Korea, which is looking for its eighth consecutive appearance at the Olympics, is scheduled to face Yemen on Saturday before meeting Iraq next Tuesday.

Korea, led by coach Shin Tae-yong, started the match with a 4-4-2 formation, putting strikers Hwang Hee-chan and Jin Seong-uk up front and playing Bayer Leverkusen’s Ryu Seung-woo as attacking midfielder. Moon Chang-jin and Lee Seung-woo took each side of the flanks, and FC Seoul’s Park Yong-woo was the defensive midfielder.

Korea almost scored a goal just five minutes after the kick-off whistle. Ryu’s slick pass to Jin led to a 1-on-1 faceoff against Uzbek goalkeeper Abdumavlon Abduljalilov, but he failed to score.

While Uzbekistan threatened Korea’s defense, comprising Shim Sang-min, Song Ju-hun, Yeon Jei-min and Lee Seul-chan, with crosses from the flanks, Korea broke the deadlock in the 19th minute with a lucky penalty.

After dribbling past an Uzbek defender, 19-year-old Hwang tried to cross the ball to center, but it hit Otabek Shukurov’s arm. Although video replay later showed that the ball might have hit Shukurov’s left chest, the referee ruled for a penalty, for which Moon stepped up and gave the team a 1-0 lead.

But four minutes later, Korea almost allowed an equalizer after center back Yeon made a back header mistake and Uzbek forward Igor Sergeev took the ball with a clear path to the net. However, Sergeev’s shot was blocked by goalkeeper Kim Dong-jun.

Korea doubled the lead in just three minutes after the second-half kick-off, as Hwang and Moon again made another goal.

Hwang, the 19-year-old who plays for Austrian club Red Bull Salzburg, penetrated the left side and crossed the ball to center, which Moon found and netted with his right foot.

But the match was not secure yet. Uzbekistan scored a goal in the 58th minute after Dostonbek Khamdamov’s left-foot shot went past goalkeeper Kim. Chased by one goal, Korea replaced forward Jin with energetic midfielder Kwon Chang-hoon in the 60th minute for better control of the game.

However, it was Uzbekistan that fell after Jamshid Boltaboev received a red card for stepping on Lee Chang-min’s thigh as both were challenging for the ball. With a one-man advantage, coach Shin decided to reinforce the attack by putting midfielder Lee Young-jae and forward Kim Hyun in as substitutes, but the extra goal never came.

Coach Shin said he is satisfied with goal scorer Moon. The 22-year-old, who plays for the K-League club Pohang Steelers, was the 2012 AFC U-19 Championship MVP and has shown promise as a core member of the young Taegeuk Warriors. But there are concerns about his frequent injuries.

“He had a difficult time last year, resting nearly four months because of an injury,” Shin said. “But I’m happy that he scored two goals in the match and is showing good performance.”

The victory extends Korea’s winning streak at the final-round Asian qualifiers for the Olympics to 30 matches (22 wins and eight draws) since 1992. But Shin said there are still things to improve.

“Since small mistakes can lead to goals, I have to tell players to be careful,” Shin was quoted as saying by the Korea Football Association. “Because it was the first match, our defenders had a tough time. But since their commitment and passion were good, I believe they can play better defense next time.”