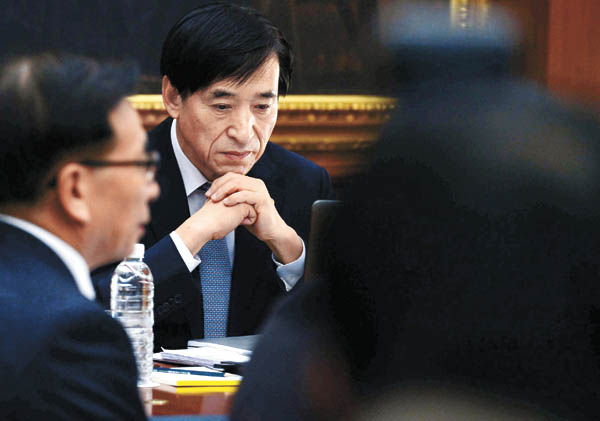 Lee Ju-yeol, Bank of Korea governor, at the monthly monetary policy committee meeting that was held at the central bank’s headquarters in downtown Seoul on Thursday. [JOINT PRESS CORPS]

The central bank gave in to the growing insecurities caused by volatility in the Chinese market and plunging crude oil prices by shaving 0.2 percentage point off this year’s economic growth outlook.

But the readjusted outlook remains at 3 percent, and some are asking whether the government and central bank are still being too optimistic.

The Bank of Korea (BOK) on Thursday announced it has lowered its outlook for this year’s growth from the 3.2 percent projected last October to 3 percent. It also readjusted its outlook on this year’s inflation growth, from the earlier 1.7 percent to 1.4 percent.

Due to growing uncertainties in the financial market, the central bank kept the key interest rate at its all-time low 1.5 percent, which has remained steady since June.

“Since we’ve entered this year, instability in the Chinese financial market including the plummeting stock market and the sharp depreciation of the yuan has created a huge shockwave throughout the global financial market,” said BOK Gov. Lee Ju-yeol. “China risk is nothing new, but the international market is showing responses to the huge fluctuation that have exceeded expectations.”

He said the recent situation was largely the result of various factors that included slowing Chinese economic growth, the readjustment of the bubble in the Chinese stock market and the Chinese government’s policies related to its stock market.

“The Korean won also showed signs of aligning to the huge changes of the yuan,” Lee said. “As trade between Korea and China becomes more intertwined, the connection [between the currencies] seems to get stronger.”

Lee added that although he expects that the yuan depreciation will likely ease, the central bank will be constantly monitoring the situation.

The newly adjusted outlook is even lower than the 3.1 percent growth predicted by the central government, and is far below the BOK’s own projection of 3.7 percent growth made last January.

But many are still questioning whether the Finance Ministry and BOK are being unrealistic about the current situation, especially when many private think tanks expect Asia’s fourth-largest economy to suffer growth below 3 percent.

Yoo Il-ho, the new finance minister, recently even said he was confident that the Korean economy could achieve growth of more than 3 percent without resorting to the supplementary budget.

While Goldman Sachs and the International Monetary Fund have expressed more optimistic views that the Korean government could see growth of 3.3 percent and 3.2 percent, respectively, many local think tanks including Hyundai Research Institute and LG Economic Research Institute are predicting growth in the 2 percent range.

Some foreign institutions, including Morgan Stanley and Citigroup, are speculating that growth will fall even below the mid-2 percent range.

“A rapid slowing in momentum at the end of 2015 suggests this new forecast is likely to be too optimistic,” said Mark Walton, senior economist at BNP Paribas, in a report released on Thursday. “Industrial production contracted sequentially in both October and November, while December’s export prices imply a sharp drop in overseas shipment volumes.

“Without a meaningful recovery in the Chinese economy, something that continues to look someway distant, such an improvement in global demand appears unlikely.”

BNP Paribas’s outlook on the Korean economy was more dismal than that of both the Finance Ministry and the central bank at 2.7 percent.

“But risks are becoming increasingly skewed toward a weaker outcome,” Walton said. “The net result for the BOK is likely to be a further disappointment on both the growth and inflation fronts, thus increasing pressure for lower rates. We expect an initial cut in March, with a follow-up cut in the second quarter.”

“The global economy including that of the United States is showing recovery that is slower than earlier expectations,” said analyst Lee. “The struggling exports could continue throughout this year, and it is unlikely that the domestic market’s recovery would improve in the short term.”

When asked what he thought about comments that the government is the only one projecting 3 percent growth and being overly optimistic, the BOK Governor said he wasn’t paying them much mind.

“We didn’t consider anything else but the economic factor,” Lee said. “Since the external situation is so bad, there are negative scenarios projecting a 2 percent growth, and so 3 percent growth can be interpreted as relatively optimistic.

“However, there are projections - including those from the International Monetary Fund - that this year the global economy and the global trade growth will be higher than last year. When based on those outlooks, why wouldn’t Korea’s export situation improve? There are unexpected side effects from the falling crude oil prices, but it will also help the real purchasing power

“Considering that last year’s growth was in the 2 percent range, 3 percent growth is not optimistic.”

Still, he stressed that there’s a high level of uncertainty outside of Korea, which was why the central bank’s monetary policy committee unanimously decided to keep the key interest rate steady, even as the Korean economy is showing signs of recovery centered on the domestic market.