Gov’t splits focus on economy to include exports

Gov’t splits focus on economy to include exports 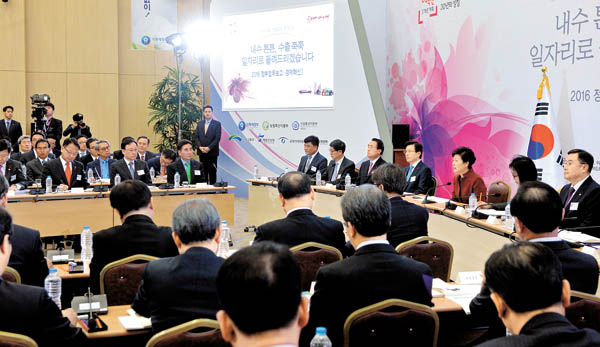 To reach its goal of 3.1 percent economic growth this year, the government will try to stimulate both domestic demand and exports, an about-face from last year’s propping up the domestic market.

But it gets clearer daily that uncertainties at home and abroad are threatening economic growth and stimulating domestic demand has its limits.

In a joint reporting of economic and financial policies to President Park Geun-hye at the Blue House on Thursday, the heads of seven economy and finance-related government branches - led by Yoo Il-ho, new finance minister and deputy prime minister for the economy - described a series of measures to boost growth.

As Park mentioned in an address to the nation Wednesday, the Korean economy is now facing an “emergency” sparked by the prolonged global slowdown and financial risks stemming from U.S. interest rate hikes and unstable Chinese market.

The economic ministers pledged to make all-out effort to defend the country’s exports by adopting new strategies and to stimulate domestic consumption by mobilizing all possible financial resources.

The Ministry of Strategy and Finance will front-load 125 trillion won ($102.9 billion) of the nation’s total budget for the year in the first three months. The ministry spent 117 trillion won in the same quarter last year.

Pension funds will make a total of 10 trillion won in investments in the domestic market, and public institutions will invest 6 trillion won.

But since the domestic market’s recovery might be slower than hoped due to global financial woes, some more weight has been put on bolstering exports.

The government will try to fully utilize the Korea-China free trade agreement this year and help small and mid-size exporters make inroads into the market. Korea’s exports to China account for 25 percent of its total already.

Since the Chinese economy is supposed to be shifting focus from exports to the domestic market, the Korean government has changed its strategy to export premium consumer goods including cosmetics, daily necessities, food and beverages, baby products and apparel.

The Ministry of Trade, Industry and Energy will set aside 4.8 trillion won for financing those exports and some services. It will also offer financial support for research and development by cosmetics companies.

The ministry aims to provide consulting services for 25,000 exporters and foster as many as 100,000 competitive exporters this year, and discover 3,000 new exporters.

The target for online exports will be doubled to 1.5 trillion won, it added.

“Despite slowing growth, China still has potential to grow in its domestic market,” said Trade Minister Joo Hyung-hwan. “It is a right strategy to target the Chinese market.”

The key to boosting the domestic market is to help expand the financial capability of consumers. So, a central part of the measures is to help reduce housing costs.

The Financial Services Commission (FSC) announced it will launch three pension plans that expand the use of the existing Housing Fund, which will help people with mortgages prepare for their post-retirement savings.

One will allow senior citizens of 60 or older to subscribe to the Housing Pension by using their homes as collateral.

The Housing Pension is a system for homeowners aged 60 or older who put up their houses as collateral. It was introduced in 2007, but a mere 0.9 percent or 25,611 senior citizen households have subscribed to it.

Another plan is targeted at people in their 40s and 50s and enables them to get Bogeumjari Loans and make pre-subscriptions to the Housing Pension. The third will give more payouts to senior citizens below certain levels of income and assets.

In line with the recent trend of switching to monthly rents from two-year jeonse (lump sum deposit) leases, the FSC also introduced a Jeonse Fund that will offer higher yields of 3 to 4 percent - higher than regular bank savings - when people invest jeonse deposits they got back from landlords. Then they can live on monthly rentals.

The financial authority will come up with legal measures to protect those deposits from risky investments. Returns from the fund can be used to pay monthly rents. Fund holders will also be able to take out loans for rents and get some tax exemptions.

The Ministry of Land, Infrastructure and Transport will double constructions of New Stay apartments, premium public apartments built by private companies. A total of such 50,000 apartments will be constructed this year in Gwacheon and Uiwang in Gyeonggi; Incheon; and Munrae-dong in Seoul. Monthly rents will be kept between 800,000 won and 1 million won for an apartment of 135 square meters (1,453 square-feet) in Seoul.

Finance Minister Yoo pledged the government will make everyone feel the benefits of the administration’s three-year economic innovation plan in 2016.

“As this year marks the last year of the plan, we are seeing positive improvements in the economy,” Yoo said in his first press conference held at Sejong Government Complex on Thursday.

“It is important to get out of the downward trend in exports, in which the nation’s exports fell 7.9 percent in 2015 from the previous year,” Yoo said.

To strengthen the domestic market, the minister highlighted deregulation and tourism.

“The government will improve its current regulations on duty-free shops in order to attract more foreign customers,” Yoo said. “And we will introduce ‘regulation-free zones.’”

The government will also lower the age of Chinese visitors eligible for double-entry visas from the current 60 to 55.