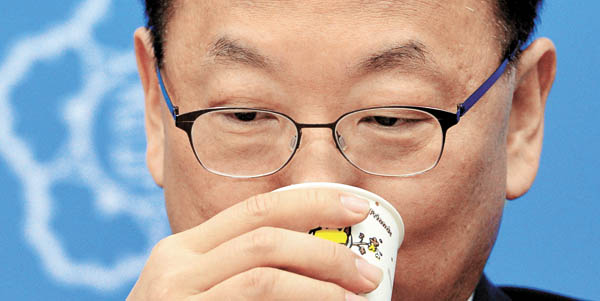 Yoo Il-ho, the new deputy prime minister for economy, said he will focus on carrying out structural reform and defended his growth projection of 3.1 percent during his first press conference as the country’s finance minister.

“The government is monitoring various factors that might cause negative effects on the local economy, such as global risk coming from China and the United States, and North Korea’s nuclear bomb test,” Yoo said at the press conference in Sejong City on Thursday, “and in order to cruise along these waves of uncertainty, we need to undertake structural reform.”

The economist-turned-politician is President Park Geun-hye’s third finance chief. Lawmakers from both the ruling and opposition parties approved him on Monday, and he took office on Wednesday.

He emphasized the need for the National Assembly to pass a series of pending bills related to revitalizing the economy and improving the labor market.

Yoo defended his projection that the Korean economy could grow 3.1 percent in 2016, brushing aside concerns about the Bank of Korea lowering its growth forecast on Thursday from 3.2 percent to 3 percent.

“I personally believe that the country can meet the 3.1 percent goal this year if everything works out as it has been to now,” he said. “There can be circumstances such as a sharp fall in domestic demand, during which we might have to intervene, but at the moment, the goal seems to be okay, and we will continue with it unless other drastic circumstances occur.”

On the issue of currency swaps with Japan, he said he was surprised by how sensitively Japan reacted to the issue.

A Japanese newspaper reported Thursday on the possibility of the resumption of currency swaps between the two countries after Yoo made a brief comment during the parliamentary confirmation hearing on Monday.

“What I meant back then was that currency swaps between the two countries might restart since we have a history of swapping our currencies,” Yoo said. “I do not see why the government should reject it if Japan wants resumption, but as of now, Korea is not likely to propose it beforehand.”

Yoo was supportive of the Finance Ministry’s decision to spend more than half of the government’s budget in the first quarter of the year to help boost the economy.

“Some worry that this decision might slow down the economy in the second half of the year, but it doesn’t work that way,” he said. “We are spending the budget that has been already planned ahead for the year, so I do not agree with this criticism.”