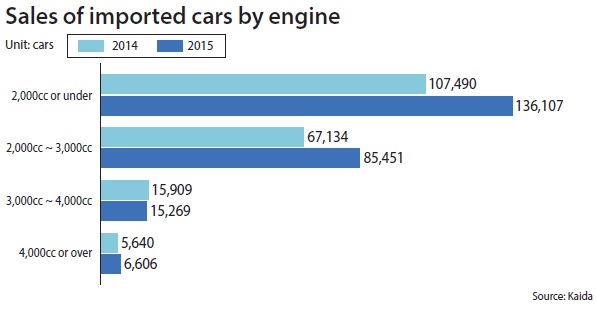 International oil prices have been plunging since last year, and Koreans are responding by using more gas and buying cars with larger engines, according to data compiled by local auto and oil companies.

As of Wednesday, Dubai crude was trading at $26.49 per barrel, West Texas Intermediate at $30.48 and Brent crude at $30.31, according to data from the Korea National Oil Corporation (KNOC). At one point, Brent crude fell below $30 per barrel for the first time since April 2004, mainly due to oversupply and economic struggles in China, which recently emerged as the biggest oil consuming nation.

In the meantime, Koreans are using more gas. The KNOC said a total 6.311 million barrels of gasoline was consumed in November, which is a significant increase from last November’s 5.972 million barrels. “It means that people don’t feel stressed about driving their cars because gas is getting cheaper every day,” said Lee Seung-yong, spokesman of KNOC.

In other words: gas guzzlers.

According to data compiled by the Korea Automobile Importers and Distributors Association (KAIDA), fuel efficient cars equipped with an engine of 2,000cc or smaller were still the most popular option among imported cars last year. The sales of such cars - including the popular BMW 5 Series - rose by 26.6 percent year-on-year, to 107,490 units. But data also showed that sales of cars with engines between 2,000cc and 3,000cc, such as the Audi A6 Quattro, also upped by 27.3 percent year-on-year. The sales of cars with an engine 4,000cc or larger also rose by 17.1 percent year-on-year, to 5,640 units.

Industry insiders say the popularity of SUVs and large-size sedans, both of which are typically less fuel efficient than compact or mid-sized sedans, will only get bigger this year.

According to data by Korea Automobile Manufacturers Association (KAMA), a total of 1.63 million cars were sold last year and 401,100 of them were SUVs - an increase of roughly 30 percent or about 100,000 units from a year ago.

KAMA said the sale of SUVs is expected to exceed 450,000 units this year.

But the low oil prices could badly impact automakers, particularly for Hyundai and Kia, which are responsible for 90 percent of Korea’s auto sales in the Middle East region.

“The ultimate solution to efficiently dealing with various market conditions is to provide a wide range of options,” said Ryu Chang-seung, an executive at Hyundai. “People worry that the green cars won’t attract consumers, but sales are expected to grow from last year’s 1.2 million units to 4 million within the next five years, and that’s why we are expanding our lineup of eco-friendly cars anyways.”