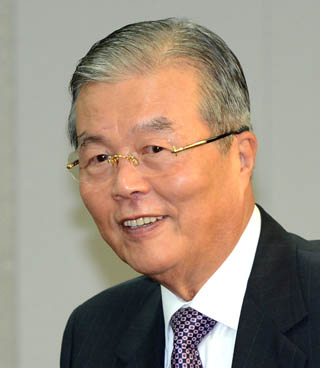 The architect behind President Park Geun-hye’s 2012 election pledge for “economic democracy” joined forces with the main opposition Minjoo Party on Thursday to head its campaign for the upcoming general election.

Moon Jae-in, the leader of the main opposition, announced Thursday that Kim Chong-in, a 75-year-old economist, had decided to join the party. Kim will head the Minjoo Party’s campaign committee for the April 13 general election, he said.

“We will launch the preparation committee for the campaign as soon as possible and appoint Kim as its chairman,” Moon announced at a press conference after an emergency Supreme Council meeting in which the economist’s recruitment was endorsed.

Calling Kim the “symbol of economic democratization,” the opposition leader continued, “Kim’s wisdom, experience and knowledge are a must for our party to become a political party capable of handling economic issues and to bring about economic democracy.”

Moon said he will seek the support of other party members on Kim’s oversight of the campaign for the election. “We will complete the formation of the campaign committee as soon as possible to win the general election and eventually the next presidential election with Kim at the center,” he said.

“I strongly believe that Kim will play a critical role in making our party capable of resolving the challenge of our time: wealth inequality,” Moon said. “The upcoming general election will be a venue of judgment for the Park administration’s inequality; it will serve as a competition between an obsolete economic force and a new economic force.”

Kim, a former four-term lawmaker who served during the Roh Tae-woo Blue House as the senior economic affairs secretary, was recruited by Park in 2011 to join the ruling Saenuri Party’s emergency leadership council.

Park was the interim party leader at the time. After working on her presidential primary campaign, Kim was appointed as one of the top brains for her 2012 presidential campaign, heading a special committee on the people’s happiness.

Known as Park’s economic policy mentor, Kim was credited with coming up with the president’s “economic democratization” pledges, which had long been dominated by liberals.

In 1987, Kim led efforts to include the concept in the Constitution through an amendment.

Article 119, Clause 2 of the Korean Constitution stipulates: “The state may regulate and coordinate economic affairs in order to maintain balanced growth and stability of the national economy, to ensure proper distribution of income, to prevent domination of the market and abuse of economic power, and to democratize the national economy through harmony among economic agents.”

However, he parted bitterly with Park after she took the office and criticized the administration for failing to follow through on her pledges of economic democratization, job creation and welfare.

In an interview with the CBS radio earlier on Thursday morning, Kim directly attacked the Park government for having failed in its economic policy.

“Economic democracy is only possible when the president has a strong determination to achieve it and when the public can feel it,” Kim said. “The [economic democratization] pledges were the top priority during the election, but disappeared after [she won the election and] the presidential transition team started promoting a ‘creative economy.’” In the interview, Kim also spoke critically about Ahn Cheol-soo, a presidential hopeful who left the main opposition party after a power struggle with Moon. Ahn is currently preparing his own liberal group, the People’s Party, with a group of supporters.

“Ahn has made an extremely foolish choice. It was a bad move,” Kim said. “He abandoned the party because the odds were against him. He is incomprehensible.”

Kim claimed that Ahn abandoned the party over his own presidential ambitions, and further stated that the move would result in a liberal defeat, with the vote split, citing past examples.

On Thursday, Moon also announced that he would step down as the leader of the main opposition once the campaign committee was settled. He will contact other liberal political groups to request an alliance for the April general election, he added.

“I have said numerous times that I would step down as chairman when the framework for unity was created,” Moon said. “And that remains unchanged. As soon as the campaign committee is stabilized, efforts will be made to unite the liberal bloc, and I will resign as chairman to realize this plan.”

A co-head for the campaign committee, who will serve beside Kim and represent the interests of voters in Gwangju and the Jeolla region, will also be named momentarily, Moon said.

The Minjoo Party found itself losing support in Gwangju and the Jeolla region as Ahn moved to form his own political force. A group of veteran politicians with strong support base in the area, including Kwon Rho-kap, left the party earlier this week, essentially severing the party’s tie to its traditional stronghold.

Moon said the election campaign committee will have full authority to nominate candidates for the general election.

“I will give up my entire right over the nomination process,” he said.

Moon added that he will try to contact Rep. Chun Jung-bae, who left the party to create his own political group, to request an alliance.