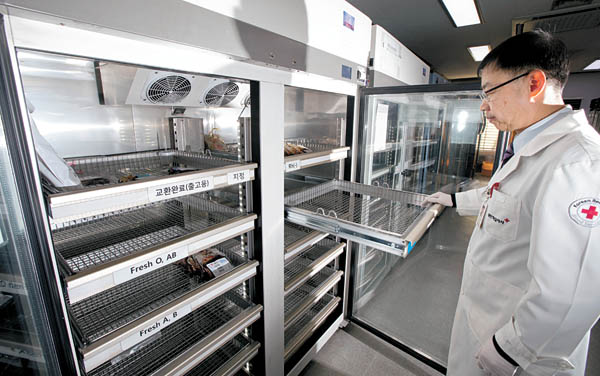 On Jan. 5, a man involved in a car accident was transported to the emergency room of a general hospital in North Gyeongsang. The staff used 30 units of blood - 320cc per unit - to stabilize him.

He needed surgery urgently but the hospital didn’t have any more type-O blood in reserve. It requested emergency supply from blood centers in other cities, but they didn’t have enough.

“We normally have around 300 to 400 units of plasma for each blood type,” said a director of a blood center in North Gyeongsang. “But at the time, our blood reserves had dramatically dropped.”

Hospitals in Korea are running short of blood.

Blood supplies usually run thin in the winter, as donors dwindle during the winter vacation. According to the Blood Service Headquarters of the Korea Red Cross, 60 percent of donors are men in their late teens and early 20s.

This winter’s battle to procure blood is worse than usual. The outbreak of Middle East respiratory syndrome (MERS) over the summer was a big factor. Surgeries were delayed for months after more than 80 hospitals visited by patients confirmed with MERS were shut down over the summer.

“As surgeries got pushed to the second half of last year, the amount of blood reserves dramatically plunged,” said Kwon Hye-ran, a director at the Blood Service Headquarters. “We are in need of blood donations of blood type A and O, which are in high demand.”

The shortage is forcing small and medium-sized hospitals and medical centers in suburban areas to send emergency patients to a bigger hospital or put off surgeries until they round up enough blood. Both endanger lives.

“If an emergency patient comes to our hospital, he or she has to be transported to a university hospital in Daejeon or Cheonan,” an officer at the Gongju Medical Center in Gongju, South Chungcheong, which had a total of six units of blood as of Tuesday. As of Tuesday, Korea had a 3.2-day supply of blood, lower than the standard reserves of five days.

Reserves for blood type O and A went below three days, prompting the Korean Red Cross to issue a yellow alert to all blood centers in Korea, a sign to be prepared for any contingencies. The level of warning will be raised to orange if the reserves go below two days.

Thanks to blood drives at military camps and public organizations last weekend, the reserves jumped slightly to 2.5 days for type O from 1.9 days, the low on Jan. 8, and 2.3 days for type A from 1.8 days. Korea’s Blood Service Headquarters is planning to encourage women and middle-aged people to donate.

It recently extended the operating hours of donation centers by two hours to 8 p.m. To attract young donors, centers are giving away gift cards for movies, coffee shops and franchise restaurants.

“Today’s blood donor can be tomorrow’s patient,” said Shon Hong-shik, 66, who has donated blood every two weeks since 1984. His nickname is Korea’s Blood King.

“Although I am healthy today, there is still a possibility that I could be in a car accident. Anyone can find themselves needing transfusion.” said Sohn, who has donated 722 times.