Former nurse in Germany now lives to give

Former nurse in Germany now lives to give 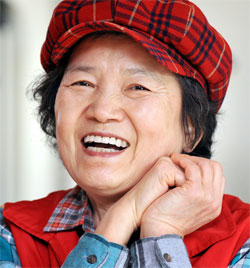 Kim Joo-ki, a 66-year-old who recovered from an accident that left her totally paralyzed, lives alone in Cheonan, South Chungcheong. Her only means of support is the government’s basic living subsidy of 400,000 won ($329) a month.

But Kim sets aside 30,000 won every month to donate to different community welfare groups.

“I do it purely for my own happiness,” Kim told the JoongAng Ilbo, in an interview at the Dojang-ri community center in southeastern Cheonan. “In fact, I feel bad I can’t donate more to people in need.”

Kim made her first donation in December 2007 after she received some financial support from the Purme Foundation for dental treatment she needed. The non-profit organization supports people with disabilities.

She decided to donate 10,000 won to the Purme Foundation to help it start a rehabilitation hospital dedicated to people with physical disabilities.

Then she started donating a total of 30,000 won to four different groups, including the Purme Foundation and Donghang, a branch of a German group called Mitgehen, which means “accompany” in English. It offers free hospice services for immigrant workers.

There was a special reason Kim was drawn to Donghang.

“I always volunteered for night shifts, which lasted from 8 p.m. tp 6 a.m., to make a higher hourly wage,” Kim said. “They were tough times but I was happy to be able to send money home for my family.”

Kim returned to Korea in 1978, but the happiness didn’t last for long. In 1979, she got into an accident that left her paralyzed. Doctors released her from the hospital after a couple of months, saying she was unlikely to survive.

Kim doesn’t like to talk about the accident, but admits that it was a psychologically devastating experience. “I wanted to take my own life,” she said, “and would have if I could have crawled to the Hangang Bridge.”

Prayer helped Kim survive, and her paralysis gradually eased. She can do simple physical exercises like stretches and taking a walk.

“I wish more people around us can realize the joy of sharing and giving,” she said.