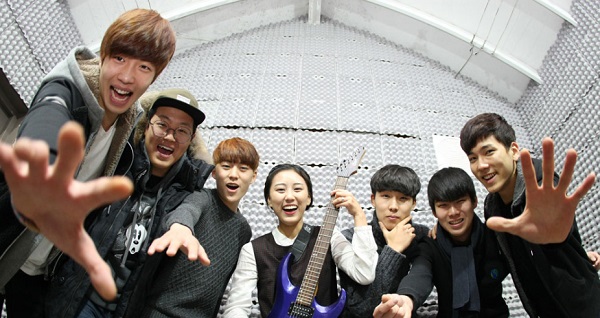 Over the past year, Kim Hyeong-woo has worked hard toward his goal of finding success in the entertainment industry, a path that has so far included finishing as the runner-up in the 2015 SBS Supermodel Contest.

He, like many other young aspiring entertainers, chose to attend the Universal Performing Arts School (UPAS) primarily because of its curriculum, which seeks to nurture students who have aptitudes beyond English and mathematics.

The school, affiliated with Daekyeung University and located Gyeongsan, North Gyeongsang, was built in 2014 with the purpose of producing the next generation of Korean entertainers.

Since its establishment, 40 students have enrolled and the first group of seven students will graduate next month.

And among them, there have already been several standouts.

Joo Young-un, 19, who enrolled at UPAS in 2014, has long dreamed of becoming a famous singer and drummer. He practices every day and watches video clips of the bands that have influenced him most.

In July 2015, Joo was also selected as the high school division winner for his performance in Korea’s 11th Dokdo Arts Festival.

At UPAS, the students take classes on their majors for more than three hours per day. The courses are mainly taught by entertainers - all professors at Daekyeung University. Students may also switch majors freely if their job aspirations change.

The school aims to provide an educational environment in which students can achieve their goals and tap into their individual talents.

But UPAS also wants to generate intelligent entertainers, and students are strictly prohibited from causing disturbances.

“Because I’m being acknowledged for my talents [that lie] outside studying, there’s no reason to make trouble,” said UPAS student Shin Ji-hyeok, 18, an aspiring rapper.

“I’m happy that I’m being encouraged to fulfill my potential as a rapper.”

Yoo Jin-sun, 56, the founder of Daekyeung University, is also working toward constructing buildings with multiple stages to hold live performances and increasing the number of UPAS students.

“I would like UPAS to be a global role model of other alternative schools,” Yoo said.