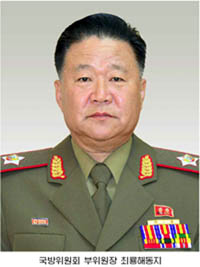 Choe, a secretary of North Korea’s ruling Workers’ Party, was reportedly purged to take responsibility for a partial collapse of a power plant in Yanggang Province and sent to a farm for re-education.

But Choe made a solid comeback as North Korea’s official Rodong Sinmun reported Friday that he made a speech at a ceremony on Thursday marking the 70th anniversary of the founding of the Kim Il Sung Socialist Youth League in Pyongyang.

Choe was reported to have told young people “to hold with pride the successful hydrogen bomb test.” He encouraged the young to “show an indomitable spirit this year when we hold the seventh congress of the Workers’ Party as we strive to open a golden age of the building of a strong nation.”

North Korea conducted its fourth nuclear test on Jan. 6 and claimed to have tested a hydrogen bomb, which has not been confirmed. The Workers’ Party will hold its seventh congress in May, the first in 36 years.

Choe was considered a right-hand man to North Korean leader Kim Jong-un. He is the son of a guerrilla who fought alongside late North Korean founder Kim Il Sung, the grandfather of the current leader, and was chief of the general political bureau of the North Korean Army.

Choe vanished from public view three months ago and was believed to have fallen victim to a power struggle after he was absent from a funeral committee list on Nov. 8 following the death of veteran military official Ri Ul-sol.

Choe was last mentioned in the state-run Rodong Sinmun on Oct. 31.

In a National Assembly report in November, South Korea’s National Intelligence Service said that Choe was sent to a rural agricultural cooperative for “revolutionary re-education.”

The top spy agency said Choe was removed from power partly to take responsibility for the partial collapse of a power plant in Yanggang Province.

There was an indication that Choe was making a comeback at the end of last year when he was named as one of the 80 funeral committee members after the death of Kim Yang-gon, the point man for handling inter-Korean policies, who was reportedly killed in a car accident on Dec. 29.

Choe’s name was sixth on the funeral committee list.

Analysts point out that a speech by Choe reported by the state media is akin to speaking for the North Korea leader, and an indication that he has been restored to the elite power circle.

The South Korean Ministry of Unification was cautious and said a rehabilitation of Choe needs “further observation.”

Ministry spokesman Jeong Joon-hee said in a briefing Friday, “It appears that Choe Ryong-hae’s activities have resumed because North Korea realized he is needed.”