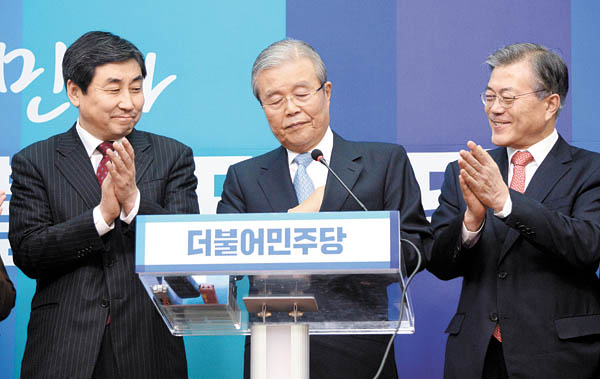 Moon Jae-in, right, chairman of the Minjoo Party of Korea, and Lee Jong-kul, left, the party’s floor leader, clap as Kim Chong-in, center, makes a speech to accept an offer to lead the Minjoo Party’s campaign committee for the April 13 general election on Friday at the National Assembly. [NEWSIS]

Kim Chong-in, the architect of President Park Geun-hye’s economic policy in the presidential campaign of 2012, vowed Friday to reinvent the main opposition Minjoo Party as he formally announced he would lead the party’s campaign committee for the April general election.

“I will do my utmost so that the Minjoo Party of Korea regains the trust of the people in the general election. By doing so, we will surely win,” Kim said during a press conference. “We reached a dead end, and this is the last chance to reorganize the opposition party and reinvent itself as a policy [oriented] party.

“In the upcoming general election, a party that can resolve disputes and realize ‘economic democracy’ will be selected by the people,” Kim said, referring to an economic slogan he has long pushed in Korea - and even used in Park’s 2012 campaign.

Kim, a former four-term lawmaker who served the Roh Tae-woo administration as senior economic affairs secretary, was appointed one of the czars of President Park’s 2012 presidential campaign, heading a special committee on the happiness of the people.

Known as Park’s economic policy mentor, Kim was credited with coming up with the president’s “economic democratization” pledges, which had long been dominated by liberals.

In an interview with the JoongAng Ilbo on Thursday, Kim pointed to polarization in Korean society that put economic development and political democratization at risk, adding that he is not a person who subscribes to an ideology of the left or right to achieve economic democracy.

The 75-year-old economist Kim rejected the idea of sharing power with a co-chairman, explaining that he had accepted the offer on the premise that he would have full authority to nominate candidates.

The main opposition party’s leader, Moon Jae-in, who had said he would step down from his position once the campaign committee was named, said on Thursday that he would soon name a co-chairman to represent the interests of voters in the Gwangju and Jeolla region. He added that he will try to contact Rep. Chun Jung-bae, who left the party to create his own political group, to request an alliance.

The Minjoo Party is losing support in that region, a key political turf for liberals, as defector Rep. Ahn Cheol-soo forms his own political force.

Moon is struggling to find a way to stop further exoduses from his party.

Along with political veteran Chyung Dai-chul, a senior advisor of the Minjoo Party, around 40 former lawmakers announced their defection from the party on Friday, saying there was no hope for the party in the next presidential election. Meanwhile, nine incumbent lawmakers representing districts in North Jeolla declared they would remain in the party.

Reacting to Kim Chong-in’s change of sides to join the opposition, ruling Saenuri lawmakers said Friday he was acting irrationally and abnormally.

Kim Moo-sung, leader of the Saenuri Party, urged Kim Chong-in to explain his stance on bills deadlocked in the National Assembly, calling him the “new leader of the Minjoo.”

Park addressed the nation on Wednesday and issued a statement on the economic and labor bills’ deadlock in the National Assembly.