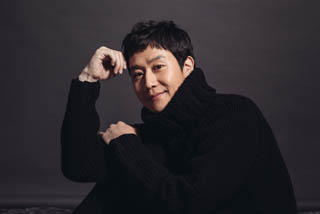 Actor Jung Woo, critically acclaimed for his turn last year in the hit TvN series “Reply 1994,” has continued to develop his career in the entertainment industry, appearing most recently in the new film “The Himalayas.”

The movie, which revolves around the experience of climber Um Hong-gil, has attracted 7.4 million viewers so far since its opening, statistics by Korea Film Council showed as of Saturday.

In the film, he plays Park Mu-taek, who befriends the protagonist following an arduous climb up Kanchenjunga.

For the actor, the role was at times strenuous, and he often found himself struggling to bring out the emotions he felt inside, especially while working at such high altitudes.

But his performance ultimately proved a success and is likely to help him expand his presence in the industry.

Meanwhile, in his personal life, Jung Woo wed fellow actress Kim Yu-mi over the weekend; the couple subsequently released photos from the event on Sunday.

Q. Why did you choose this film?

A. How I decide which movie to take is all based on the scenario. I think most actors do the same. I check whether the story is powerful or not. Then I see if it moves me. Whether it’s funny or a tearjerker, I like scripts that appeal to emotion.

How difficult was the film to shoot?

I don’t know if I saw any change in my weight, but my face got bloated. I look chubby in the movie. I usually swell easily, and it got worse as we traveled in higher and higher altitudes. Filming in Nepal was particularly difficult. I got some sleep while we filmed in Mont Blanc, in France, but I barely slept in Nepal. I used to sleep very lightly, for an hour or two. It was chilly. And because I couldn’t bathe, I smelled. All of that was difficult for me, and I came to appreciate my life here. I came to be thankful for things I barely noticed in my everyday life. Even drinking a cup of coffee made me feel thankful.

Was this one of the biggest challenges for you?

Actually, when I first started filming, I wasn’t that determined in any way. But I started to see after about a month that filming wouldn’t be easy. I felt so exhausted - like filming should have been over already.

What was it like working with actor Hwang Jung-min?

Good. He played the lead climber Um Hong-gil and he was also the leader on our filming team. He always took the lead and that made all of us feel like we were in this together. The other actors and staff members all suffered. Everyone was going through the same difficulties so it wasn’t really about someone taking better or worse care of someone else. Everyone needed to control his or her condition and hold up.

Is there any scene you wish you could do over again?

All the scenes. For real. I did my best, but with each project I wish I would have done things differently. This time, I feel that a lot more. But I don’t have any regrets. I did my best.

What goals do you have as an actor? Is there anything you absolutely want to do?

Would you want to be recognized as an actor capable of drawing in more than 10 million viewers per movie?

I’ve never dreamt that could happen. It’s all up to the audience.