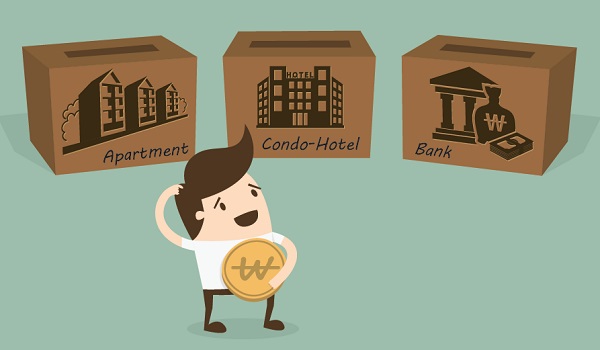 With the Bank of Korea’s key interest rate at an all-time low last year, more investors sought higher returns by putting their money into real estate instead of banks - and 2016 looks to be no different.

Despite the U.S. Federal Reserve’s plan to gradually raise its rate in the next couple of years, many economists expect the Korean central bank to take at least another year before raising its rate from the current 1.5 percent.

Coupled with deregulatory policy measures introduced by the government in 2014 to encourage housing transactions, more Koreans have flocked to real estate as a preferred investment option.

According to the Korea Appraisal Board, annual returns from real estate averaged 5 to 6 percent last year. It was nearly double the average returns from installment savings accounts (2.4 percent) and national or corporate bonds (3 percent).

But even this seemingly safe investment is showing signs of unease. Oversupply of apartments and officetels, dual-purpose buildings used for both commercial and residential purposes, has led to slowly shrinking returns. As a result, one new real estate product is emerging as a popular investment: condo hotels.

Condo hotels differ from conventional hotels like the Westin Chosun and Hyatt because under the local Public Health Control Act, the units can be booked by travelers but are categorized as residential apartments rather than tourist accommodations.

And while an individual investor can own a unit or a stake in a condo hotel, responsibilities involving management, operation and rental of the room fall on companies specialized in hospitality services.

Returns for this new type of real estate investment are based on each room’s utilization rate. More travelers mean higher returns for the investor. This has led many condo hotels to promise earnings of up to 10 percent.

“Condo hotels are the best investment in this era of super low interest rates in the 1 percent range, and oversupply of conventional products like officetels that offer lower returns,” read a recent advertisement by Hotel MarinaBay Seoul, which is slated to be completed in 2019, in the JoongAng Ilbo. “Our hotel guarantees you 13 percent returns and a monthly net earning of 730,000 won [$600] when you initially invest 67 million won.” 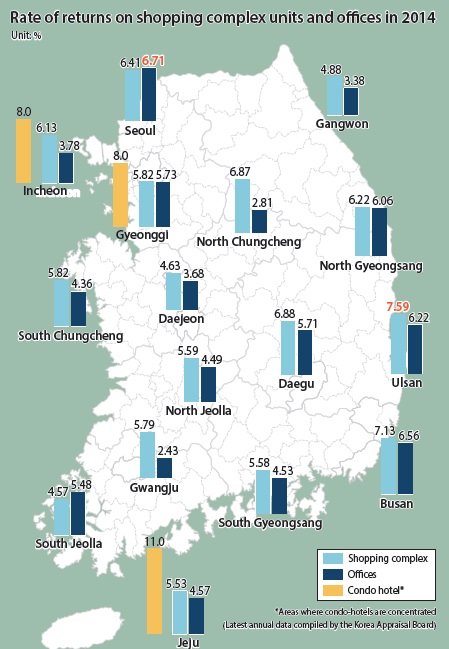 What’s more attractive is the fact that each owner gets a VIP membership, which includes 10 free nights of stay per year at the condo hotel and long-term stay for just a few hundred dollars. This type of membership is well-suited for a society like Korea that is aging quickly and seeing more people take early retirement. The perks even include the use of golf courses and car rentals.

“We started presales in mid-December, and the higher-end rooms sold out within three weeks,” said Hong Seok-ho, director at Seven Partners, a marketing agency of the hotel. “Investors of various age groups applied. Older investors can spend their leisure time here, and younger generations get higher returns than with other traditional real estate investments.”

Most of Korea’s condo hotels are located on Jeju Island, thanks to its popularity among Chinese tourists and local retirees. Korea’s first condo hotel, Ocean Palace, was built there in April 2011 and offered 257 rooms.

Nowadays, condo hotels can be found all over the country, from northwestern parts of the peninsula like Yeongjong Island to ocean towns like Pyeongtaek and Gimpo in Gyeonggi. The target clientele for short-term stays is Chinese businesspeople, as the Korea-China Free Trade Agreement is expected to boost tourism and business between the two countries, making the hotels a potentially profitable investment.

In 2012, only 571 condo hotel rooms were sold to investors in Jeju, according to the Korea Investors Service. In just three years, the number skyrocketed tenfold. As of last February, the number of rooms sold totaled 5,103.

Some of the condo hotels with units currently up for sale include the Jeju Western Grace Hotel and Emporium Hotel in Yeongjong Island, and Pyeongtaek Western Bay Marina Hotel in Pyeongtaek. They are known to have yields from 7 percent to as high as 11 percent.

With such high returns, the number of condo hotels is rising fast.

About half of the total 589,399 square meters (146 acres) of land that the government allocates for accommodations facilities were used to build condo hotels in 2014. This was up 300 percent compared to a year earlier, when they only took up 79,181 square meters.

Despite the surging interest and supply of condo hotels, experts warn that it is still too early to determine if the new business model is safe.

“As the real estate market is almost saturated, many investors are turning their eyes toward newer niche segments [including condo hotels],” said Park Won-gap, a real estate analyst at Kookmin Bank. “But they must be careful because the returns from these [condo hotels] are so new in Korea that we haven’t seen reliable data or success cases yet.”

“People are skeptical about condo hotels because not many hotels have actually started operation, but that’s because it takes about three years to build,” said Hong from Seven Partners. “As more hotels open up, they will start proving their investment worthiness. Then condo hotels will become a more reliable investment product, and investors will be able to distinguish between the good and bad ones.”

Since the returns are highly dependent on the rooms’ turnover rate, if there is not enough demand as forecasted, the burden of the hotel is directly passed on to the investors. Experts say it is important to pay attention to the location of hotels and whether the area is capable of bringing in many tourists and business travelers.

“Many promotions on hotel room sales state the company will prepay a fixed rate of returns to investors, but that kind of earnings rate calculation is vague and unreliable,” said Yoon Ji-hae, a senior analyst at Real Estate 114.

At most hotels, returns are calculated using the amount of equity capital invested, excluding loans in the total amount invested. So the amount of returns an investor actually receives in the end could decline as much as 5 to 6 percentage points from the returns the hotel developer originally promised.

However, if the investor is written as a stakeholder, the process of sell-off and exercising property ownership becomes more complicated.

Checking an operating company’s soundness and management history is the most significant factor in choosing a condo hotel investment, as brokers and operating companies often commit fraud.

This heightened risk means even if new types of real estate products are emerging as hot investment destinations in the market, experts say old favorites like apartment units may be the safest choice this year.

“I’d rather recommend investors go for the traditional and mainstream products, especially in a time of oversupply and declining returns,” Park from Kookmin Bank said.

Flagship commercial real estate like offices, officetels and shopping complex units will still be popular, offering an annual average return of at least 4 to 5 percent, depending on the location of the property.

North Gyeongsang, Daegu and Gyeonggi also offered good deals. Despite smaller margins compared to a couple of years ago due to recent oversupply, returns in these three areas were still higher than interest income from banks.

Real estate experts say Magok, Wirye and Hanam in particular are newly emerging hot spots for property sales in Gyeonggi, while Gangnam District, a long-time favorite of property investors, is still popular, with enough demand to cover all the supply.

“Local investors will keep paying attention to commercial real estate products like arcades and officetel units next year, especially if the [Korean] interest rate rises at a slow pace [following the U.S. rate hike],” Ham Young-jin, head of research at Real Estate 114, wrote in a recent report, “because profitability is higher when you rent out real estate than when you save at banks.”

Land plots are another popular investment option. The number of transactions in this product totaled a record-high 2.55 million as of the third quarter last year. Land prices also went up for the seventh straight year. Nationwide, prices rose 1.67 percent as of the third quarter last year, slightly lower than the 1.96 percent increase recorded in 2014, but still a steady pace despite threats of a U.S. rate hike.

Land prices are expected to continue rising in 2016 but at a slower pace than last year, as the government continues with measures announced in September 2014 that ban further land development and raise the transfer income tax.

However, Ham from Real Estate 114 emphasized that investors should choose land with new development prospects, such as areas around the second Jeju airport and 2018 Pyeongchang Olympics.