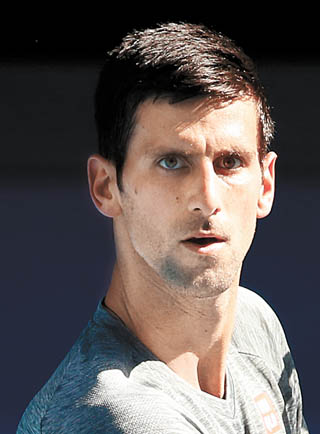 Still, in what has become something of a tradition, he handed out some delicacies at his news conference Sunday. He doled out chocolates at his first meeting with media at previous Australian Open tournaments and it’s worked - no man has won more titles here than Djokovic in the Open era.

Ahead of his title defense, and a bid for a record-equaling sixth Australian title (Roy Emerson won six in the 1960s before the Open era started), the No. 1-ranked Djokovic only slightly tweaked his recipe for success. The treats this time were “healthy, energy balls,’’ he told the assembled crowd.

It goes with his strict diet, one of the factors in his improved ability to handle the weather conditions in Melbourne, which can range from extreme heat to cold and windy on the same day.

“It’s what I have on a daily basis,’’ he said, explaining the contents as “different super foods - and nuts and plant-based milk with cocoa and so forth. Pretty healthy stuff.’’

Whatever the ingredients, it must be working.

Djokovic struggled earlier in his career with the heat at Melbourne Park, where he won his first major in 2008. He can handle all kinds of weather and court surfaces now, evidenced by his 2015 season when he lost only one match at Grand Slams - the French Open final.

That “was the best season and best year of my life undoubtedly. I enjoyed every moment spent on the court,’’ Djokovic said. “I’ll try to obviously carry that confidence and high level of performance that I’ve had, especially toward the end of the year, into the new season.

“The opening week of the year in Doha went extremely well for me. I haven’t dropped a set. I’ve been preparing well, taking some time to really work on certain things, get a good foundation.’’

After losing a lopsided final to Djokovic in Doha, 14-time Grand Slam winner Rafael Nadal described the Serbian player’s level as close to perfection. Roger Federer, who has won 17 majors but hasn’t added to his tally since 2012, agreed Djokovic was the clear favorite at Melbourne Park after winning four of the last five titles.

The defending champions will feature in back-to-back matches on Rod Laver Arena on Monday afternoon, with Serena Williams opening her title defense against Camila Giorgi of Italy and Djokovic on next against Chung Hyeon of South Korea.

Federer, who is on the top half of the draw with Djokovic, will feature in the first night match on the center court against Nikoloz Basilashvili. Maria Sharapova, the 2015 finalist, Genie Bouchard, Sloane Stephens and former No. 1-ranked Caroline Wozniacki are in action in the women’s draw, which starts on Rod Laver Arena with sixth-seeded Petra Kvitova against qualifer Kumkhum Luksika of Thailand.