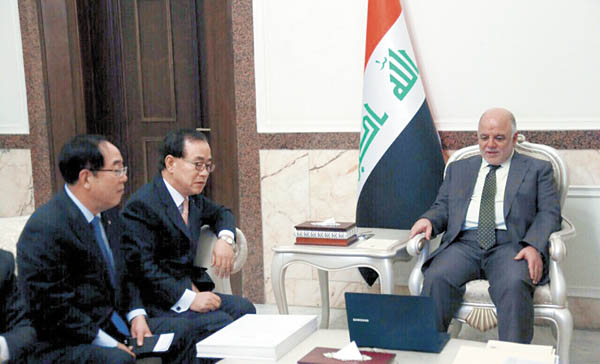 The construction business in the Middle East has slowed as a result of low international oil prices, but an urban development project by Hanwha Engineering & Construction (E&C) is cruising along.

In May 2012, the company won the $8 billion Bismayah project to build 100,000 houses and an additional contract worth $2.1 billion last year to build social infrastructure including 300 schools and hospitals, electricity infrastructure, as well as water purification plants.

Bismayah is about 10 kilometers southwest of Baghdad. The new city will be about six times bigger than Korea’s Yeouido, in western Seoul. The Bismayah project will take seven years and is the single biggest project won by a Korean construction company overseas. It is the first contract to build an entire city.

The company said the payment was made after CEO Choi Kwang-ho was invited to meet Iraqi Prime Minister Haider Al-Abadi on December 27 for about two hours. Choi was the first foreign businessman invited to meet Al-Abadi after the prime minister was inaugurated in August 2014. Choi gave a briefing on the progress of the project and the prime minister promised to give his utmost support to successfully finish the project.

“The meeting and the payment made by the Iraqi government show that the project is going in a right direction,” said a spokesman of Hanwha E&C. “The prime minister is busy dealing with political issues including fighting the Islamic State and political reforms, but he made time to personally check the current status of the project.”

Hanwha said a total of 3,120 apartments ordered by the National Investment Commission were already completed. A total of 834 apartment buildings will be built on 59 blocks, according to the company. The company expects to expand its business in the Middle East region in the future, especially since sanctions against Iran have been lifted. Iran was the fifth-largest market in the region for Korean construction companies until 2010.