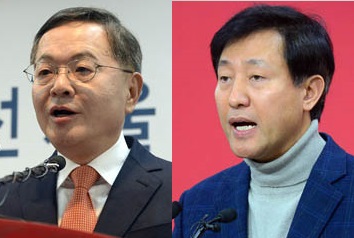 Former Seoul Mayor Oh Se-hoon declared his intention Sunday to run for Jongno District in the upcoming general election in April, flatly rejecting calls from the ruling party’s chairman that he run in a more challenging constituency to help the ruling party gain an advantage.

Oh held a press conference at the party’s headquarters to announce his bid despite repeated pleas from Saenuri Chairman Kim Moo-sung that he run in a district that the party perceives as “strategically important” ? those it has a lesser chance of winning with lesser known political players.

Speaking before reporters, Oh lamented the fact that the party had lost the district over the last five years to the opposition and vowed to do his best to secure a Saenuri victory.

“I chose to run in Jongno District because we need to revive the heart of Seoul in order to revitalize the city, which will in turn reactivate the economy,” he said.

On rejecting the party leadership’s demand, he acknowledged that he had “agonized” over his decision prior to making his announcement.

“I came to the conclusion that delaying my decision any longer would only do harm to my fellow party members,” he said.

Oh’s declaration dealt a blow to Kim Moo-sung’s leadership and came following repeated demands from the chairman that he use his profile to run in a constituency with a strong allegiance to the main opposition Minjoo Party. Oh’s bid has the potential to reignite internal feuds within the ruling party.

Park Jin, a former three-term lawmaker who represented Jongno until his bitter defeat to Chung Sye-kyun of Minjoo four years ago, has been gearing up for months to reclaim the district and has not shied from openly demanding the former mayor choose a different constituency.

In a display of disgruntlement, Park held a press conference immediately following Oh’s to lash out at the former mayor, calling his bid “selfish” and as going “directly against the interests of the party.”

“Oh has no political ties to the district and has made no contributions to its development,” Park said. “His bid in the district, with the major focus on cementing his political standing, will only damage the party and [be detrimental] for district residents,” Park said.

Ahn made headlines May 2014 after he was tapped as President Park Geun-hye’s nominee for prime minister. But he quickly found himself mired in controversy as questions arose over some 1.6 billion won ($1.3 million) he accumulated in just five months after his retirement.

In the midst of snowballing accusations, he bowed out just prior to his confirmation hearing.

Ahn refuted that he had rejected the Saenuri chairman’s call, noting that the ruling party had always struggled in Mapo District and that it would be equally challenging for him to beat incumbent opposition lawmaker Noh Woong-rae in the event that he won the nomination.

The former Supreme Court justice is widely recognized for his decades of service in the legal sector, and the ruling party has long sought to capitalize on his judicial profile.

Kim’s push to implement an open primary system, in which non-party members cast ballots to nominate candidates, has also hit a stumbling block amid strong resistance from Saenuri Party members with ties to Park Geun-hye’s loyalists in the party.