Some seniors’ depression is purely physical

Some seniors’ depression is purely physical 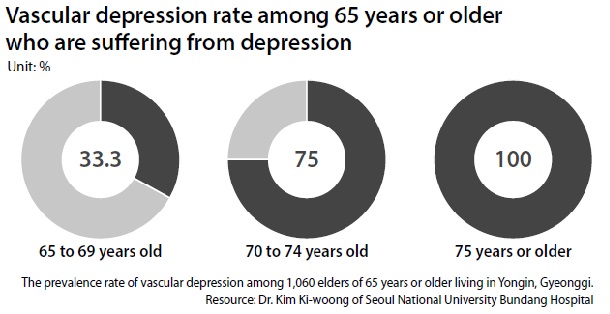 Mr. Kim, a 68-year-old living in Jeonju, North Jeolla, became severely lethargic two years ago. He lost interest in everything, barely got out of bed and didn’t want to eat.

Even though he had high blood pressure and diabetes, his health was considered good for his age. His family started to worry about him and sent him for extensive tests.

The diagnosis: Kim was depressed, which seemed obvious. But it wasn’t a psychological problem. Kim had so-called vascular depression resulting from blockage or damage to blood vessels linked to the brain.

The general perception is that depression is caused by a psychological trauma such as divorce, a layoff or serious health problems, but many seniors over the age of 65 are suffering from the depression caused by their own bodies.

Vascular depression is caused by the cerebrovascular diseases ? strokes or mini-strokes which are mainly caused by restriction in blood supply in the brain blood vessels according to a recent study.

Dr. Kim Ki-woong and his colleagues at the Neuropsychiatry Department at Seoul National University Bundang Hospital released last week the result of the survey they conducted on 1,060 people 65 years or older living in Yongin, Gyeonggi, to examine the link between cerebrovascular disease and depression.

Kim’s team is the first domestic study on the prevalence rate of vascular depression in different age groups.

It showed that among seniors with depression, the rate of vascular depression from 65 to 69 years old was 33.3 percent; in people 70 to 74 years old it was 75 percent. And for people over 75 years old, the rate was 100 percent.

According to a study of 10,451 seniors 65 years or older by the Ministry of Health and Welfare in 2014, one out of three elders had depression and patients with severe depression that needed medical treatment accounted for nearly 10 percent.

Vascular depression is cause by blockages or damage to blood vessels linked to the brain due to high blood pressure, diabetes, hyperlipidemia and other causes. On MRI scans of these patients’ brains, white matter hyperintensities can be seen.

“Depression is likely to develop when the blood vessels connected to the neurotransmitters get thinner or are blocked and blood cannot circulate properly,” Kim said. “This is where decisive factors in human emotions such as serotonin and dopamine are being created.”

The symptoms of the vascular depression are different from the types of depression young or middle aged people suffer.

“Normally, depressed patients feel constant sadness, while the patients with vascular depression show a lack of motivation and energy,” Kim explained. “We need to consider vascular depression when the elderly lose interest in watching their favorite TV shows, do not move around a lot, or speak less than before.”

“Older people who do not show progress in recovering from medical treatments or complain of generalized pain need attention as well,” Kim added.

Treatment for vascular depression is also different. Antidepressants don’t work. Nor does psychotherapy.

Vascular depression is treated with medicines such as psychostimulants and mood stabilizers along with treatments for the cerebrovascular blockage. Vascular depression can also lead to cognitive dysfunctions and the rate of potential suicide is raised.

The good news is that because vascular depression is caused by physical problems, it is possible to prevent.

“Cardio exercise such as walking on a regular basis is the best prevention,” Kim advised.

Meeting and conversing with friends or relatives can also be helpful.