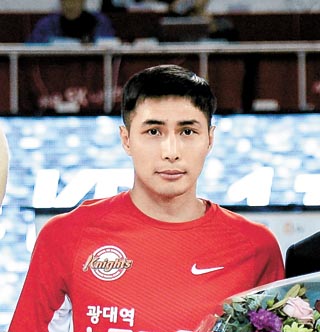 Last week, he added another milestone to his career, becoming the second all-time leader in 3-pointers.

Over the weekend, Joo knocked one 3-pointer each in a game against the Incheon ET Land Elephants and Wonju Dongbu Promy to bring his record total to 1,118, making him the sole No. 2 in the league.

Knights coach Moon Kyung-eun is the all-time leader in 3-pointers at 1,699.

Joo, the KBL MVP in the 2008-09 season, is known as a man of practice. His record is a result of his consistency because while Moon only played the shooting guard position, Joo is a point guard who focuses on delivering passes.

This season with the Thunders, the former KBL Rookie of the Year, has 5.4 points, 3.6 assists, and 2.4 rebounds in his 24 minutes of playing time.