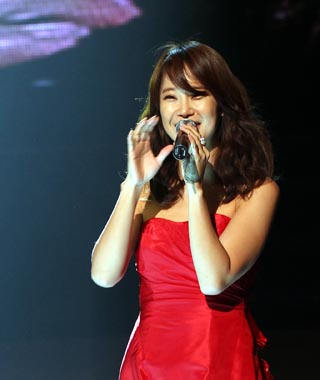 Diva Baek Ji-young is slated to release a digital single next month.

“Baek will release a ballad song, and she has joined hands with Verbal Jint,” Baek’s agency, MusicWorks Entertainment, said Monday. “You may expect a lot from the combination of the two.”

The agency also uploaded a black-and-white poster of Baek, which appears to be the album cover of her upcoming digital single.

Baek’s most recent album came out in 2008, but she has since been appearing on TV shows.

She was one of the three main judges for the seventh season of TV audition show “Superstar K” last year, and she recently began to host the show “Starry Night” on MBC Radio.

The singer is scheduled to hold a solo concert in the United States in March, too.

The concert will be held at the Agua Caliente Casino Resort Spa in Palm Springs, California, on March 5.

Baek debuted in the music scene 16 years ago. She soared to stardom with dance music, but she has also received recognition as a ballad singer in 2006 after releasing her first ballad, “I Won’t Love.”

She is often referred to as the queen of original soundtrack songs.