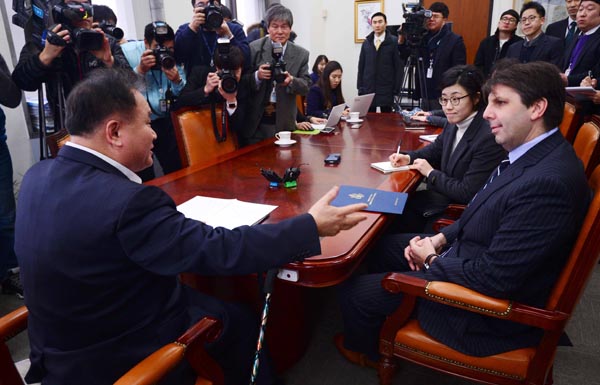 U.S. Ambassador to Korea Mark Lippert, right, meets with Rep. Lee Sang-min, left, the chairman of the Legislation and Judiciary Committee, on Monday to deliver a joint statement calling for a revision to the Foreign Legal Consultant Act, which is currently pending in the National Assembly. [NEWSIS]

A joint statement issued by a group of four ambassadors to Korea on behalf of foreign legal consultant offices was delivered Monday to the National Assembly’s judiciary committee. The statement is in protest of a bill that deals with the opening of Korea’s legal services market.

U.S. Ambassador to Korea Mark Lippert met personally with Rep. Lee Sang-min, the chairman of the Legislation and Judiciary Committee, to convey the statement, which called for the need for a revision to the Foreign Legal Consultant Act pending in the National Assembly.

The statement - which also included the signatures of the top envoys from the European Union, the United Kingdom and Australia - warned that the bill, which regulates the opening of the Korean legal market to law firms based in the European Union and the United States, goes against the free trade agreements between those countries and Korea.

The four ambassadors pointed to a clause banning foreign law firms from owning a stake greater than 49 percent in a joint venture as unfair, arguing that the rule would excessively protect Korean law firms.

They also urged lawmakers to ease or abolish a qualification requirement for foreign law firms. Under this bill, a foreign law firm hoping to launch a joint venture with a Korean law firm is required to have more than three years’ experience in the local legal industry.

There is “no problem,” Lee said, so long as the bill is passed by May, enabling plenty of time for further deliberation. He added that he had requested that the Ministry of Justice take into consideration diplomatic concerns.

A bill to open Korea’s legal services market to law firms based in the European Union and the United States was put on hold on Jan. 7, ahead of the final vote by the Legislation and Judiciary Committee, due to strong backlash from the four diplomats.

From March 2016, a free trade agreement with the European Union will allow foreign law firms to form joint ventures with Korean partners and hire Korean lawyers, the last of three transitional stages that began when the FTA went into effect in 2011. The bill, which has to be passed at the plenary session by June, according to the Korea-EU FTA, will fully liberalize the Korean legal market to European law firms in July and to American firms in March 2017.