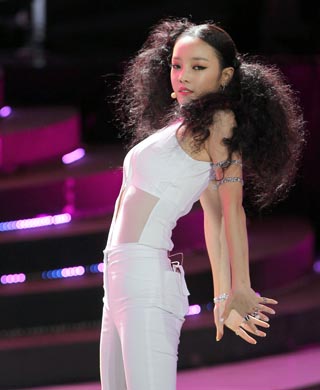 Keyeast, which represents big-name actors such as Kim Soo-hyun of “The Producers” (2015), Uhm Tae-woong of “Valid Love” (2014) and Park Seo-jun of “She was Pretty” (2015), said on Monday that “Goo has potential not only as a singer but as a versatile entertainer who can act and host TV shows. We’ll help Goo expand her career outside Korea with our expertise in management.”

Goo debuted in the music scene in 2008 as a member of now-defunct K-pop group Kara. The group recently broke up after three of its members including Goo did not extend their contracts with DSP Media, which represents Kara.

By signing a deal with Keyeast, Goo will focus more on acting, although she hasn’t tried acting before.

The 25-year-old celebrity is currently appearing on SBS’s “Shaolin Clenched Fists,” in which celebrities learn martial arts from martial arts masters in China.