Statue planned for another type of victim

Statue planned for another type of victim 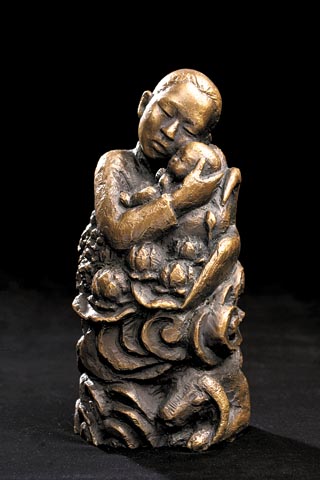 A model of the “Vietnam Pieta” to honor civilian victims of the Vietnam War. [KIM SEO-KYUNG]

GOYANG, Gyeonggi - The creators of the famous Peace Monument in front of the Japanese Embassy in Seoul are now planning a new project to memorialize victims of the Vietnam War (1960-75).

Kim Seo-kyung and Kim Eun-sung, who have been married for 26 years, believe that as much as the Korean people want the Japanese government to atone for its wartime atrocities, so, too, the Korean government needs to step up and acknowledge its past wrongdoings.

The controversy over the Japanese imperial military’s sexual enslavement of Korean women during World War II is ongoing, even though the governments of the two countries reached a diplomatic agreement to resolve the issue last month. The deal struck Dec. 28 includes an apology from Japanese Prime Minister Shinzo Abe and the creation of a state-backed fund for the victims, amounting to approximately 1 billion yen ($8.3 million). The two sides also discussed the possibility of relocating the Peace Monument, which was installed in 2011, but so far no action has been taken.

The artists have made seven different sculptures memorializing former Korean sex slaves, euphemistically known as “comfort women,” of which 25 castings are located in Korea and two in the United States. They also have plans to install three more in the coming months. 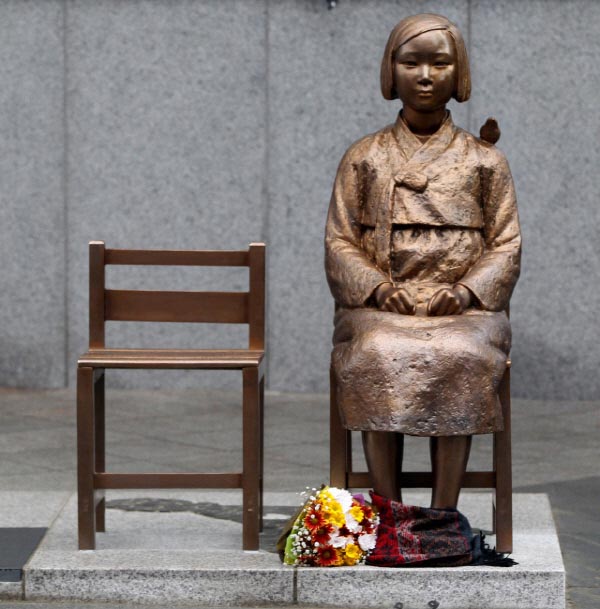 The Peace Monument, set up in 2011 in front of the Japanese Embassy in Seoul, represent the young women used as sex slaves by the imperial Japanese military during World War II. [KIM SEO-KYUNG]

But the two sculptors have recently turned their attention to different victims. Some records indicate that the Korean military also committed atrocities by massacring Vietnamese civilians during the Vietnam War.

“This kind of history and that kind of history is all ours, whether it is something to be proud of or something that falls short,” said Kim Seo-kyung.
“Just as ordinary Japanese civilians’ willingness to care about comfort women induced more Japanese to become aware of the issue, we need to start the movement to see what was done and how some Koreans once victimized others,” she added.

To commemorate civilians killed and injured during the Vietnam War, the sculptors are planning a statue of a mother holding a baby, tentatively named “Vietnam Pieta.” They plan to start making the statue in March, and hope to erect one in Korea and one in Vietnam, though the exact locations are not decided.

While the couple’s works may seem political in nature, they say that’s not their intent. They just happen to observe the issues and are eager to express their feelings through sculpture. The two say their works are merely their way of communicating their thoughts.

As for their most famous statue in downtown Seoul, they say the Peace Monument has taken on a meaning of its own.

“People see the girl statue as a human instead of an artwork,” Kim Seo-kyung said. “The act of individuals adding a knit hat or scarf, letters, poems or heat packs to the statue means that people have started to add their own meanings to it, and use it as a medium to express their thoughts about the issues related to the abused women, just like we made it to express our anger and the wish never to repeat the painful history.”

Even other artists are creating new works inspired by the statue in support of the movement or what the statue represents. “The idolization or symbolism of an artwork has been perfected here, which is rarely seen in the history of the Korean art,” said Lee Dong-jae of Gong Gam, an art consulting company.

“The image of young women suffering was only abstract until the statue arrived, and it solidified the vague concept and many, without even seeing it in person, associate the issues regarding comfort women with this statue.” 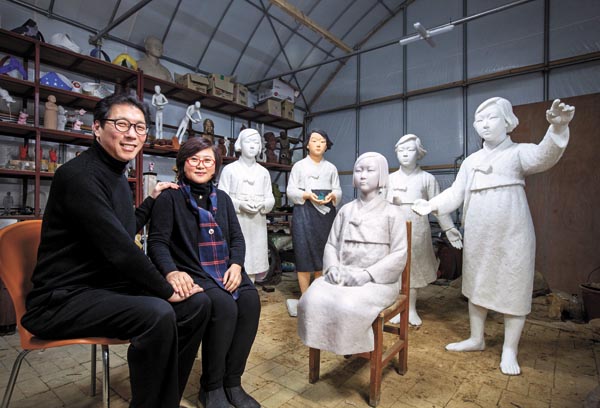 The Korea JoongAng Daily met the two sculptors at their studio in Goyang, Gyeonggi, and near the Peace Monument in Jongno District, central Seoul, to hear more about how they find their inspiration.


Q. What are your plans for the Vietnam Pieta?

A. Seo-kyung: I’m trying to finish it by May. I just want to expedite it. It is not easy to find a place to set up the statue as it involves some diplomatic issues. It’s not decided if we will make one for Korea first or for Vietnam first. I have been to Vietnam three times in the past two years and met with civilian victims. I learned there are many infants who died without being given names because they died before turning 1 year old. I will be donating this statue to the town where it is installed.

How did you come to be interested in making the Peace Monument?

Eun-sung: I was like everyone else, who follows the news about comfort women, and assumed that something would have been done to amend things since Kim Hak-sun came forward in 1991 to testify about her suffering. Then one Wednesday in 2011, I was walking by the Japanese Embassy and saw people still protesting. I felt sorry and regretted that I hadn’t done anything to help in the past 20 years. I went to the Korean Council for the Women Drafted for Military Sexual Slavery by Japan, introduced myself as a sculptor and asked if there’s anything I could do. They asked me to design a memorial stone. We suggested a statue instead, and it was decided. We wanted to touch people’s hearts. 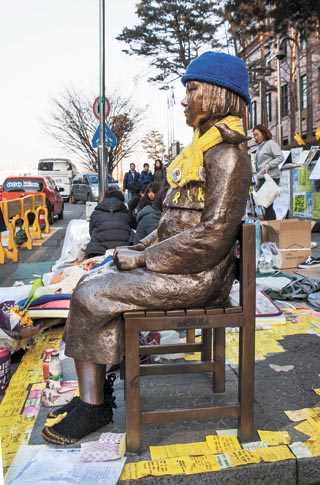 The Peace Monument across from the Japanese Embassy in central Seoul is surrounded on Friday by university students, who are holding an ongoing demonstration against moving the statue from its current location. [PARK SANG-MOON]

Seo-kyung: It was important to have people sympathize. I wanted to make a world where children can be happy. I want children to live in a world where common sense works.

Did you use a particular woman as a model for the statue?

Seo-kyung: We didn’t want to do that because we had to make a symbol that can encompass all the women who suffered. We chose to do a girl who’s around 13 to 15 instead of a grandmother. They were victimized when young so it made more sense. We wanted to show how their ties to their families and country were cut involuntarily by giving the statue roughly cut hair. There were some testimonies that girls got their hair forcefully cut.

We didn’t want the statue to look weak, because these women who have held protests for 20 years are not mentally weak since they come forward with their painful experiences. I wanted to show that through the facial expression. So it took the longest time to create the face of the girl. We also had the statue make fists to show her will to go through any struggle until peace is reached.

Can art be political?

Seo-kyung: History, politics, social issues and the economy don’t play different battles. They are all combined together, even in the smallest act like paying for something. We live in the world where all of these are intertwined and affect our everyday lives in a way. All of the things that surround us are the inspirations for any artwork.

Then what are the things to consider in an attempt to keep arts artistic rather than political?

Seo-kyung: It should never become a slogan. If it becomes a slogan, that work becomes a one-time thing and becomes obsolete. To keep an artwork from becoming a slogan, there has to be an element that can move people emotionally.

Eun-sung: Take a look at the sculpture “The Burghers of Calais” by Auguste Rodin. It reflects the political and diplomatic problems between Great Britain and France. Pablo Picasso’s “Guernica” was also received by many as an artwork inspired by a very political issue [the Spanish Civil War]. Regardless of what meaning people decided to put into these works, they both are amazing and loved by a global audience. There are so many artworks that express political events. Of course, some people will think that artworks should not reflect political issues and try to remove political elements from artworks, but I think those people are far more politically biased. Arts can never be clearly separated and it coexists with many other issues.

Then how do you balance the political elements in your work?

Eun-sung: It is not about balancing, but more about deciding how much you want to push the message. So with the girl statue, we wanted to show the suppressed emotion, grief and anger, but those all require making the statue with a lot of action. But in the end, we decided to put all these emotions in a statue of a young girl. If you put all your emotions directly into your artwork, it won’t be widely sympathetic. It is artists’ job to sublimate all the emotions on a deeper level. Then it becomes more powerful.

Seo-kyung: I’m just doing what I can do and do well, which is working with clay. That’s how I speak up and how I communicate. Such speaking up resonates with many, and I of course can’t ever ask for more. And as that voice was widely accepted, some people even added their own interpretations on top of the message I built. That makes me uncomfortable in a way, but it makes me feel thankful all the same. I have accrued some perspective as I have lived my life and I have made artworks based on that perspective. I simply wanted to tell stories of those who have less rather than those who have more. If that’s politically biased, is going against my perspective considered not politically biased? I don’t think so.

Why do you think the Peace Monument became so powerful?

Seo-kyung: I have done some work on making small-sized sculptures since I was young, because I wanted to get rid of any authority that inevitably comes with larger-sized structures. I just wanted my work to be something casual, like just chatting with my neighbors, so I use materials that are understandable to the public and build up stories behind my sculpture. It is all about sympathizing. I like making a human-shaped sculptures. I like observing people, their behavior and their emotions. To be able to show their emotions, I need to watch the smallest movements of their muscles.

How does it feel to be the creators of what can be considered the most powerful sculpture in Korea right now?

Eun-sung: Sometimes I wonder, what have I done? I think we really touched the Korean sentiment. Sometimes I feel both burdened and proud. None of my other work will ever make such sensation even if I put forth my best efforts each time.

Do you allow the use of images of the Peace Monument?

Seo-kyung: Yes, we are open the use of any two-dimensional images of the statue and try to accommodate requests to use it commercially as well. However, since we are sculptors, we try to take measures to stop anyone from making anything three-dimensional. We want to have certain protections for our work, even though the statue is now a shared one.