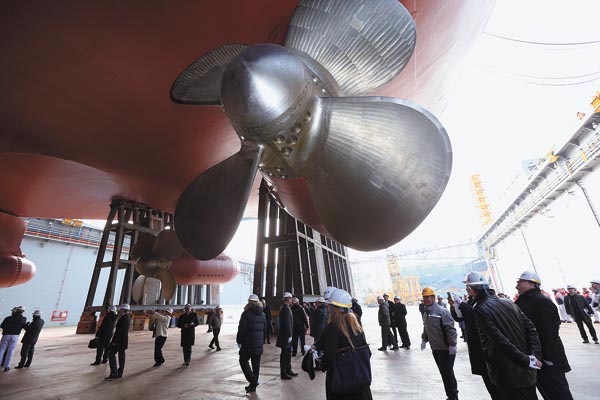 It was the first ship to be launched for Russia’s Yamal project and part of a 15-ship order that is supposed to help turn around the troubled shipbuilder.

The 299-meter (980 foot) long, 50-meter wide vessel is an Arc 7 design ice-class LNG carrier with a capacity to carry up to 170,000 cubic meters (44.9 million gallons) of LNG and break through a maximum of 2.1-meters-thick ice. The ship can carry two days of Korea’s nationwide demand for LNG.

“World’s energy sources are in decline and many are eyeing the natural resources buried in the Arctic Circle, which is why our icebreaking LNG carrier may come in useful in developing the sea route to the North Pole,” a spokesman from the company said.

While existing ice-class vessels climb above the ice and breaks the ice with downward pressure, the new model collides directly with the ice. Super high strength steel plate and a 360-degree rotating propeller were installed to aid the vessel’s icebreaking and ability to move forward and backward.

Russia President Vladimir Putin’s Yamal project aims to develop the 1.25 trillion cubic meters of natural gas reserves in Russia’s Yamal Peninsula in Siberia. The buried resources amount to 60 times the annual consumption of natural gas in Korea. The reserves are expected to produce 16.5 million tons of LNG per year.

To ship out LNG from the peninsula through a sea route rather than delivering it through pipelines, Russia’s maritime shipping company Sovcomflot opened a tender to construct 15 LNG carriers able to pass through the ice in the Siberian area. From 2012, major shipbuilders around the world were invited to bid for the so-called jackpot deal. DSME won orders for all 15 ships, which cost roughly $300 million each.

The first carrier is scheduled for delivery to Russia by October.