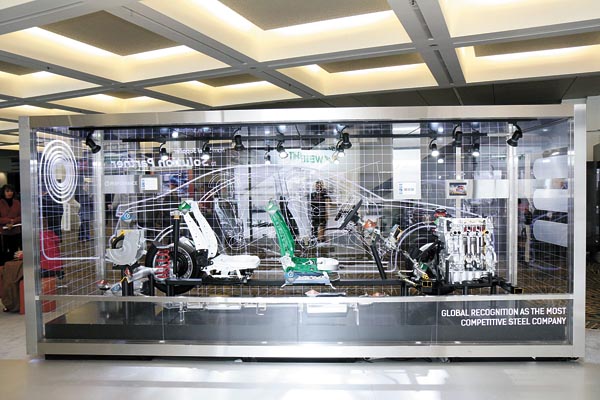 A car body built with Posco’s high-strength steel sheets is displayed at the steelmaker’s booth at the 2016 North America International Auto Show in Detroit. [POSCO]

Steelmakers searching for new products to survive a slump in the industry may have found one in car steel sheets, considered one of the highest value-added products.

The nation’s leading steelmaker Posco is currently participating in the 2016 North America International Auto Show, where it is showing off about 30 car material products, including its in-house twinning-induced plasticity steel (TWIP) and hot-press forming steel (HPF).

Posco is the first steelmaker in the world to display at the North American auto show.

Products like TWIP and HPF are meant to reflect industry-leading technology. The material’s manganese and aluminum blend make it 30 percent lighter than regular steel but three times stronger. One square millimeter of TWIP can withstand 100 kilograms (220 pounds) of weight, according to the company. HPFs are used to make center pillars of vehicles. 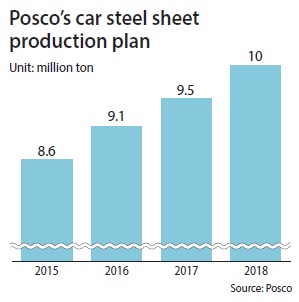 Along with TWIP and HPF, Posco also showed off Transformation Induced Plasticity, which the company recently succeeded in mass-producing, and a prototype of Extra Formability, which the steelmaker is currently developing to provide better production efficiency for automakers.

Posco’s goal at the auto show is to show off its car steel sheets, which are developed with high-strength steel that is generally 10 percent lighter and two times stronger than normal steel. Many global automakers have been focusing on producing cars that offer better safety and fuel economy.

“The car steel sheet business is part of the company’s world-premium products and it is expected to improve our overall profitability as it is a high value-added product that makes big profits compared to other goods,” said a spokesman of Posco. “It’s something that not so many companies can produce since it demands many complicated processes. Competing in normal products that any steelmakers - including Chinese - can produce is something we should not do.”

Improving profitability has been one of the most significant tasks for the steelmaker since Kwon Oh-joon was inaugurated as its new chairman in 2014.

Posco has planned to increase its car steel sheet sales from last year’s 8.6 million tons to 9.1 million tons this year and expects to sell 10 million tons in 2018, adding that about 70 percent of its steel product sales will be made from the car steel sheet business. The company already is supplying sheets to global automakers such as Volkswagen, GM and Toyota through its 10 car steel sheet production plants worldwide. The company currently runs 10 continuous galvanizing lines - six in Korea and four overseas - and will build another in Gwangyang, South Jeolla and one each in China and Thailand by 2017.

“In an economic slump that has a lot to do with low international oil prices, Posco has been focusing on premium products including car steel sheets since the auto business was one of the few businesses that is benefiting from plunging oil prices,” said Lee Jae-gwang, a researcher at Mirae Asset Securities.

No. 2 steelmaker Hyundai Steel is also working on making high value-added products such as a next-generation car steel sheet that the company expects to start mass producing in 2019. The company recently started supplying high-strength steel for the second generation of the K7 sedan made by affiliate Kia Motors.