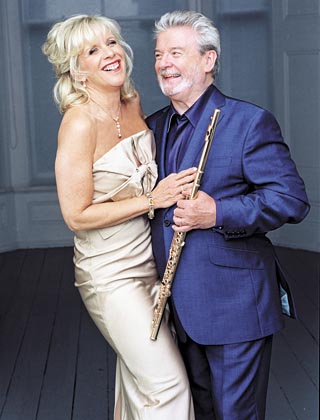 Sir James Galway and his wife, Lady Jeanne Galway, are visiting Korea for the Galway Flute Festival, which kicks off today. [PAUL COX]

Flute may not be as popular with music students as violin or piano. But thanks to Sir James Galway with his dozens of albums, which have sold more than three million copies worldwide, many young flutists in Korea and abroad say Galway and his music were what made them to pursue the instrument.

The 76-year-old Irish virtuoso is visiting Korea for the first time in five years to launch the Galway Flute Festival from today to Sunday at Gonjiam Resort in Gwangju, Gyeonggi.

This six-day “flute camp,” according to the festivals Executive Director Paik Soo-hyun, is an opening festival before the inaugural Gonjiam Music Festival is scheduled to kick off in October. Along with Galway and his wife, Lady Jeanne Galway, who is also a flutist, around 20 famous flute players from countries like Switzerland, China and Japan will participate in the camp to teach, talk and hold concerts for young flute players in Korea.

So the main objective of this new classical music festival, which is slated to be held outdoors in the scenic Gonjiam Valley, according to Paik, is to provide the general public with “more easy classical music pieces, more talking and introductions to the musicians, more hands-on experiences of musical instruments for children in an environment where there is food and drink for families and friends to enjoy, like they are on a picnic.”

To introduce this new style of music festival in Korea, Paik and Philipp Jundt, an artistic director for the festival, decided to invite Galway for an opening concert and flute camp to give the Korean audience a taste of what the festival will be like.

“Our idea is to break up this difficult classical music world,” said Jundt, who is also a professor at the German School of Music, Weimar, and teaches flute at Kangnam University as part of the schools’ exchange program. “Of course there are some festivals and concerts that try to appeal to the more general public by doing lighter programs, but that’s not the only thing we do. We want to let audiences learn about more the personal side of the musicians. We think that if the musician is closer to the audience as a person, the person will also be closer to the music.”

The idea is to have musicians talk about themselves more on stage, showing short video clips about the artist on the screen and playing some music for them as well. And the best artist to kick off this new approach, according to the directors, is Galway, whom they believe is the “perfect person who incorporates this kind of mentality.”

Oftentimes at concerts, Galway is known for engaging in fun conversations with the audience and putting them at ease.

“Even for serious flute pieces, he’ll talk to the audience and tell them about the pieces and tidbits about the composers,” said Jeanne Galway. “He gets them to laugh, but they are also learning at the same time. So for the upcoming concerts at the flute camp, it will be more about sitting down on a couch and talking to the audience as well as playing for them.”

Galway, considered as the best flute player in the last century, was inducted into the Most Excellent Order of the British Empire in 1979 and granted knighthood for services to music in 2001. The Irish virtuoso began playing the flute when he was about 10 years old and has dedicated his life to the instrument for more than 60 years. The secret to his lifelong career, according to Galway, is to “practice every day.”

Galway’s teachings are straightforward, yet he does it like no other.

“Philipp Jundt, the artistic director, came to Sir James Galway’s classes in Switzerland, and he saw how my husband can transform these players on any level,” Jeanne Galway said, adding that many flute players will also want to hear about “how he does it. How he’s able to play the whole concert and never get tired. How he can play until he’s 76, with no pain, with no problems with his hands. He’ll teach the students how to hold the flute, how to breathe and how to work the ambidextrous.”