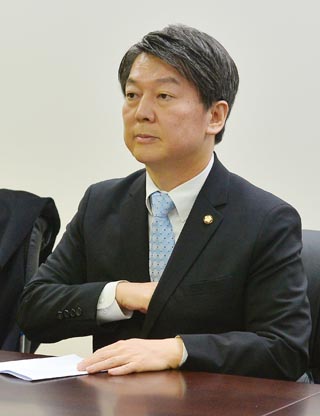 Rep. Ahn Cheol-soo, the leader of the new People’s Party currently under creation, has declared that his party will not seek an alliance with the opposition Minjoo Party of Korea in order to field unified liberal candidates for the April 13 general election.

“We will never form alliance with the Minjoo Party in a way to field one unified candidate for one constituency,” Ahn said in an exclusive interview with the Monthly JoongAng, a current affairs magazine published by JoongAng Media Network. “The People’s Party will seek to secure supporters as a third party.”

His assertion has drawn clarity over the political landscape, cementing the certainty that the ruling party will field its own candidates in the race to run against several liberal contenders per constituency. The Monthly JoongAng sat down for an interview with Ahn on Jan. 13, and published copies of its February edition on Monday. The following is the excerpt from the interview:

Q. Do you have any intention to form an alliance with the other opposition parties for the upcoming legislative elections?

A. There will be no alliance with the main opposition Minjoo Party. So far the Minjoo Party has exercised a politics of arrogance; in other words, the party has tried to dictate its own members. If they shared the same goal, for a change in power, the party should have joined forces. But the party has driven away its lawmakers who have a slightly different way of thinking. ... We should terminate their savage politics, which defines any dissenting opinion as “evil.”

Many political observers believe your party cannot win the general election unless it forms an alliance with the Minjoo Party.

I think we have to consider fielding one unified candidate for the electoral district where the approval rate for the ruling party and the main opposition party is nearly equal. A People’s Party candidate will surely remove the chances of winning for the opposition side by splitting liberal supporters. Minjoo Party supporters as well as Saenuri Party loyalists are now moving to support us. Voters need a third alternative. I will accept voters’ judgement humbly.

What’s your opinion about an alliance with Rep. Chun Jung-bae or former lawmaker Sohn Hak-kyu?

Can you run for a different constituency other than your current electoral district, Nowon C in Seoul?

I will follow the majority opinion within the party. I will even accept a non-candidate if the party demands it.

What is your opinion on the government-led economic and labor reform bills currently pending in the National Assembly?

To amend the Constitution, we need a national consensus. We have to think first about how to improve people’s basic rights rather than the power structure.

How would you evaluate President Park Geun-hye?

President Park was good at performing - issuing apologies for her father’s wrongdoings in the course of her presidential election campaign in 2012. But look at what she has done since being elected. She has completely changed. In the end, it shows that her actions before the election were for show - those were not her own values. Any political leader should be well-informed of the values inherent in the Constitution and internalize them. We should guard against any performance for show, like hers, that are void of value.

Why do you so often mention the late President Kim Dae-jung?