Putting interests aside to look after the nation

Putting interests aside to look after the nation 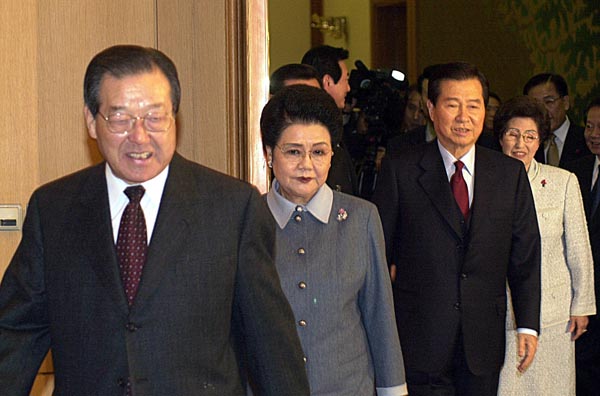 Kim Jong-pil, front, and his wife Park Young-ok, behind Kim, walk into the presidential office on Jan. 8, 2001, after dinner at the Blue House with President Kim Dae-jung and first lady Lee Hee-ho to discuss maintaining their political alliance. [KIM JONG-PIL]

The political dilemmas statesmen confront often force them to choose between reality and the ideal, as well as between the party’s interests and those of the nation.

The best scenario would be for them to foster an environment beforehand to satisfy all the options at stake. But most times, it is one way or another. When this happens, a politician should keep in mind that he or she must forsake personal interests for the sake of national well-being. Political benefits must benefit the people, not the politician.

During my two-year tenure as prime minister under the Kim Dae-jung government, I always tried to prioritize the people over personal interests. 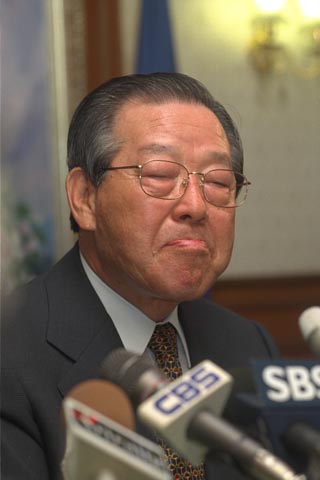 Prime Minister Kim Jong-pil announces his decision to suspend the political process for a constitutional amendment for a parliamentary system on July 21, 1999. [KIM JONG-PIL]

The first few months of the Kim government were marked by tumult, with the opposition Grand National Party (GNP) persistently trying to jeopardize state affairs. GNP lawmakers tried their damnedest to vote down my appointment as prime minister. And faced with stiff resistance, President Kim had no choice but to name me as an acting prime minister.

The country was mired in financial crisis and national unity was essential. But instead, the opposition GNP tried to obstruct the formation of the government.

There was no reflection on how the previous Kim Young-sam government had brought about the financial collapse of the country; rather, they were just bitter that they had lost to Kim Dae-jung.

The National Assembly finally approved my appointment on Aug.17, 1998 - 167 days after the inauguration of the government - putting an end to my tenure as acting prime minister.

Afterward, the press looked for any possible sign of a rift between me and President Kim, especially regarding our agreement to push for a constitutional revision that would introduce a full parliamentary system.

In our pact, reached before Kim won the 1997 election, we promised to complete the implementation of a parliamentary system by the end of 1999. We also stipulated that the first prime minister under the new system would come from the United Liberal Democrats (ULD), which I chaired.

But doubts lingered inside the ruling National Congress for New Politics (NCNP). NCNP lawmakers couldn’t imagine giving up their vested power after decades of suffering and persecution before taking the Blue House with Kim Dae-jung. The amendment would mean that President Kim would have to relinquish his presidential authority just two years after his inauguration.

My political alliance with the NCNP was the first of its kind in Korean politics in that two political parties were responsible for state affairs. Times were hard, too, and the country was struggling to recover from the 1997 financial crisis. I came to the conclusion that I needed to display a strong sense of unity with the government.

“Because we are in a time of great challenge, I think discussions for a parliamentary system should take place later in the future instead of now,” I said. “We must spend our energy reviving the economy.”

Kim and I led the government in a parliamentary style in which deep communication between the president and prime minister was required. In accordance with our agreement, ministers related to the economy and finance were to be appointed by my party.

President Kim made every effort to make me comfortable serving as prime minister. The political landscape also called for our cooperation, as the combined number of parliamentary seats from the two parties enabled the government to hold a majority.

But I was under growing pressure from insiders within the ULD to pull off the switch to a parliamentary system. In our agreement, Kim and I had drafted a detail timetable for its introduction, and Kim would submit a constitutional revision to parliament for approval. Once approved, it would be put up for a national referendum.

But the president was also feeling the pressure.

The leaders of both parties empowered me and Kim to find a breakthrough in this matter.

Still, the president began expressing reservations about the reform. The country’s future, he said, hinged on whether his government could overcome the challenges that stemmed from the financial crisis. He also mentioned North Korea. “The country must stand united; we need all our energy to persuade North Korea to walk toward reconciliation, away from its nuclear ambitions.”

I knew that his remark was simply his subtle way of indicating that he wanted to delay the political process for the parliamentary system. So I faced two choices: Should I focus on the future of the ULD, or the future of the country? I decided on the latter.

On July 17, 1999, my wife and I were invited to a dinner hosted by President Kim, who also brought the first lady. Afterward, he apologized, admitting that he had come to the conclusion that he could not keep his promise to embrace a parliamentary system.

“After reviewing all my options as president, I couldn’t help but judge that the country is not at a stage for such reforms now. I don’t think I can keep that promise anymore. I am so sorry,” he said.

I asked him what made him think it was impossible to carry it through.

“There is a big gap in the perceptions of a parliamentary system between the people and political establishment,” he answered.

“Under the agreement, you are mandated to take the lead in efforts to implement such a system,” I said. “Can you at least submit a bill to the Assembly to revise the Constitution?”

He could not submit such a bill, he said, especially knowing that it would be voted down by the opposition GNP.

“It would be tantamount to deceiving the people,” he added.

“He must be facing a dilemma as the leader of this country that I simply can’t grasp as a politician,” I thought to myself. “He made his decision after looking at all the information available to him as commander in chief. I should respect his call then.”

“I understand your agony,” I said. “Let’s move on to the next chapter [of our political alliance].”

Giving up on the parliamentary system would be a crushing defeat for the ULD. Some of the lawmakers who had campaigned on this platform were disappointed in the president’s decision and left the party in protest. Others claimed that Kim had deceived me.

I resigned as prime minister and returned to lead the ULD. In the 2000 general election, the number of lawmakers in the ULD elected plummeted to 17 from 55. I felt helplessness watching the party’s downfall.

But if I had been forced to make the decision back then, I think I also would have decided to postpone the political process for a parliamentary system. It is the path a politician should take for the good of the nation.