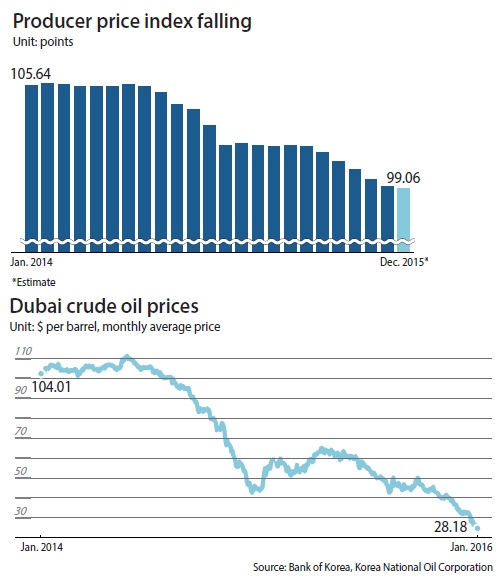 Korea’s producer price index in 2015 plunged 4 percent from a year earlier, posting the largest fall since the data was first collected in 1990.

The cause was nose-diving crude prices, according to data from the Bank of Korea on Tuesday.

The index is the Bank of Korea’s evaluation of producers’ prices for intermediary goods, fresh produce or services being traded domestically on a monthly basis.

Dubai crude went down 1.57 percent to $24.65 per barrel on Monday from a day earlier, reaching a 12-year low, according to the Korea National Oil Corporation (KNOC) on Tuesday. The plunge came after Iran’s announcement that it will expand crude production.

Oil prices are down about 21 percent this year overall amid volatility in Chinese markets and speculation that a surge in exports by Iran after the removal of restrictions capping its crude sales will prolong a global glut. The Persian Gulf nation’s first-quarter production increase is probably already priced into the market, according to a report from Goldman Sachs Group.

Analysts have reported mixed forecasts. Standard Chartered predicted earlier this month the global crude price will stay weak for the coming years and could reach as low as $10 per barrel, considering intensifying instability in the Chinese stock market and the oil oversupply issue in the wake of Iran’s policy announcement. Morgan Stanley predicted oil prices closer to $20 per barrel.

Given that crude prices are directly related to exporters’ shipment performance, oil will continue to drag on the already difficult Korean economy this year, adding to the problems caused by China’s economic slowdown and the weak yuan, according to Kim Yong-joon, head of the foreign currency team at the Korea Center for International Finance.

“There is nothing the government can do policy-wise [when it comes to the oil oversupply issue] except for sustaining demand,” said Kim Seong-tae, a senior researcher of macroeconomics at the state-run Korea Development Institute, adding there also isn’t much the government can do to boost sluggish exports.

The gross producer price index, which takes into account intermediary goods and services for both domestic consumption and export, dropped 4.2 percent year on year in 2015. That indicates local exporters last year sold the same products at cheaper prices than before.

Export data in the first 10 days of this year is not upbeat, either, even with the fact that export deals are usually clinched near the end of each month is considered.

According to the Korea Customs Service, export volume totaled $8.52 billion, down 22.5 percent from the same period a year ago. It is the largest plunge since January 2009, when the year-on-year fall registered 34.5 percent in the aftermath of the 2008 global financial turmoil.

Some market experts believe that the oil price will start rebounding in the latter half.

“Low oil prices will trigger demand in advanced economies such as the United State and Europe, offsetting the slump in China,” said Lee Jae-yong, a researcher of international oil at KNOC.

“The oversupply issue will be eased, as oil producers in non-OPEC [Organization of the Petroleum Exporting Countries] may end up going bankrupt after months of extreme low oil prices. Then, supply will slow down and the oil prices will rise again.”