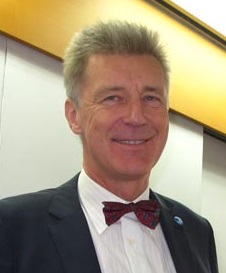 The new European Union Ambassador Gerhard Sabathil lauded the bilateral free trade agreement (FTA) that entered into full force on Dec. 13, calling it a “success story” that has “seen a major increase in mutual trade.”

However, the envoy called for the proper implementation of the Korea-EU FTA - which provisionally went into effect on June 1, 2011 - specifically in regard to a parliamentary bill that can limit opening Korea’s legal services market to law firms based in the European Union and the United States.

A group of four ambassadors to Korea issued a joint statement to the National Assembly’s judiciary committee on Monday in protest of the Foreign Legal Consultant Act, which was supposed to be put to a vote by lawmakers earlier this month.

The envoys claim the act is in violation of the free trade agreements between those countries and Korea.

“It’s not only a letter, but the spirit of this free trade agreement, because we think the Korean market should not be more closed. In fact, it should be as open as our markets for Korean lawyers who might be in Europe or the United States or Australia,” said Sabathil, who spoke with Korean reporters Tuesday at a luncheon at the Press Center in central Seoul to discuss regional and global issues.

The top envoys of the European Union, the United States, the United Kingdom and Australia pointed to the unfairness in clauses that block foreign law firms from owning a majority stake in a joint venture and impose strict qualification requirements.

“I saw some criticism that it is intervening in domestic affairs, but we have a free trade agreement and so, of course, we’d like to implement it,” the EU’s top envoy, who was posted in Korea in September, said.

He added it was “very normal diplomatic practice” around the globe for envoys to address a parliamentary chairman on issues of concern for both countries.

There are currently 22 embassies in Seoul that are EU members.

In his previous post, Sabathil served for four years as director for East Asia and the Pacific in the European External Action Service (EEAS), the EU’s diplomatic corps.

Sabathil also emphasized that the European Union, including its diplomats in Pyongyang, condemned North Korea for its fourth nuclear test on Jan. 6.

“I think the key for the survival of this regime in the North is in China,” said Sabathil. “We have asked often for China to step up in a bolder way.”

“We have, of course, actively contributed and collaborated with the UN Security Council and we are a strong part of the resolution which is under development,” he added. “It’s important that China is fully on board with the sanctions we adopt.”