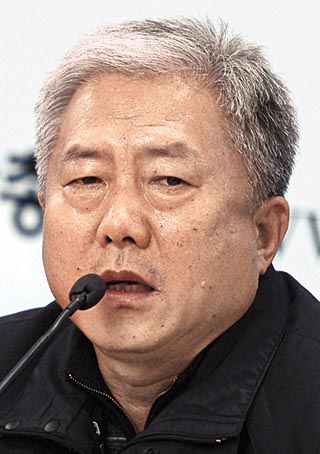 The grand compromise among the government, labor and employers on reforms of the labor market has fallen apart as labor decided to break the agreement, accusing the government of trying to pull a fast one on two sensitive issues.

The Federation of Korean Trade Unions (FKTU) said Tuesday it was walking away from the September agreement and will not join upcoming negotiations with the government and companies.

“The Sept. 15 agreement has been ripped into tatters by the government and ruling party,” said FKTU President Kim Dong-man, at the federation’s headquarters in Yeouido, western Seoul. “We declare the agreement has fallen apart and nullify it.”

The federation criticized the government for its attempt to unilaterally implement guidelines to allow employers to dismiss underperforming or negligent workers and to ease the current rule requiring agreement from at least 50 percent of labor union members when introducing new rules related to recruitment, reshuffles and dismissals.

The government guidelines on those two issues can be executed without legislation by the National Assembly, and were still being negotiated.

Representatives from the three sides reached the hard-fought agreement to reform the nation’s labor market on Sept. 15, 2015.

The negotiations started in September 2014 as part of President Park Geun-hye’s ambitious plans to bring reforms to four sectors of the economy: labor, education, finance and public administration. Due to protests from unions, talks were halted for months before the Sept. 15 compromise was reached.

The agreement included contentious issues, such as adopting the so-called “peak wage system” that gradually cuts salaries for senior workers several years before retirement, and revising the employment laws to make it easier for employers to freely lay off underperforming workers.

The guidelines for the two sensitive issues have not been decided yet. But the government seemed to be going in a direction labor didn’t like.

“The government held a forum on the two guidelines on Dec. 30 and announced its conclusion to the press, which is an action implying its intention to unilaterally execute the plans without discussions with labor and management,” Kim said.

The labor representative also criticized the four labor-reform bills pending at the National Assembly, calling them “bills to mass-produce irregular employees,” which refers to employees on contracts rather than in jobs with full benefits.

Kim Dae-hwan, chairman of the Economic and Social Development Commission, criticized the umbrella labor union for breaking the agreement.

“As a chief arbitrating the three sides, I will not evade responsibility for the broken agreement,” Kim said at an emergency press conference held at the Seoul government complex on Tuesday. “The FKTU leadership and the government should also share the responsibility.”

Kim’s remarks were interpreted to mean he will tender his resignation for the failure of the agreement, and expects resignations from the FKTU president and Employment and Labor Minister Lee Ki-kweon.

Since the umbrella union declared it will not join further negotiations, the government is expected to start working on the labor reforms on its own. “Labor reform is necessary to give jobs to young people and revitalize the economy,” Lee said in a separate press conference on the same day.